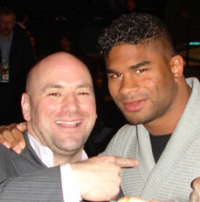 UFC President Dana White learned of Alistair Overeem’s failed drug test Wednesday just 30 minutes prior to a conference call he had scheduled with Canadian media. When White was asked about his thoughts on the matter, The Star Phoenix reports White was none too pleased:

“I am beyond pissed about this. I’m so (expletive) mad right now I can’t even begin … The worst part is that he sat in front of us and lied to us (insisted to White and Fertitta he was clean and would pass all drug tests).

As far as who might replace Overeem against Junior dos Santos in the UFC 146 headliner, White said he did not have a plan-B. And as far as Overeem’s future inside the UFC, White said, “It doesn’t look good.”

Stay close to ProMMAnow.com (www.prommanow.com) for more on this developing story and Overeem’s UFC future.