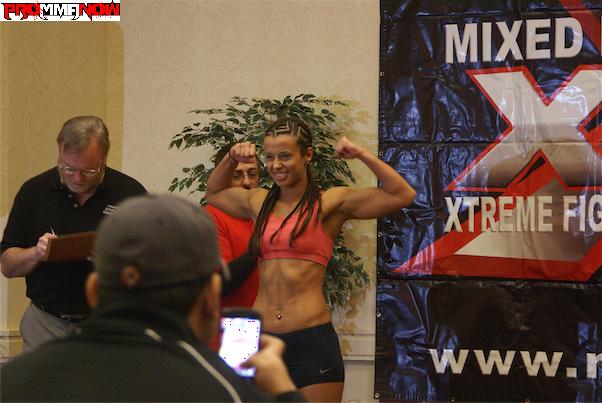 Gina Carano, Ronda Rousey and Miesha Tate have all became household names in MMA circles and are undoubtedly some of the most famous faces in women’s MMA. This comes by way of talent and wins, but it would be hard pressed to say that the stunning good looks of these athletes are not a part of their popularity.

If looks play into the building of a WMMA star as well as talent, then Marianna Kheyfets should be a name recognized amongst the others very soon. Undefeated at 5-0, Kheyfets will be making her Bellator debut on March 30 when she takes on Munah Holland (3-1) at Bellator 63 as part of the preliminary card that will be streamed on Spike.com.

Kheyfets is coming off a victory over Heather Clark at XFC 16 in a fight where she only saw one round of action, winning by doctor’s stoppage after the first, but is expecting her upcoming bout to go longer.

“I always come out to finish fights, but I am expecting more work than my last fight with Heather,” Kheyfets told FIST-ta-CUFF radio of the ProMMAnow.com radio network. “Munah is a tough opponent who’s been fighting for a long time with lots of experience; I respect her.”

“The Crushen Russian” recently cut back her hours at her job outside of MMA to focus and prepare for her Bellator debut. Despite the increased time in the gym, Kheyfets doesn’t plan on changing much of her usual preparation or gameplan against Holland.

“I concentrate on what I want to do,” Kheyfets said. “I don’t tailor things to an opponent. You improve your game and train to do what you want to do.”

Kheyfets, who is still under contract with the XFC, is looking forward to the opportunity of fighting on a Bellator card for the first time.

“I’m fortunate enough to have a good relationship with the XFC who let me have this one-off fight with Bellator because it was taking place in my home town.”

Although an impressive win at Bellator 63 would seem to open up the doors to fighting again for Bellator, Kheyfets is content with her standing and relationship with the XFC.

“I don’t feel like I will be fighting outside of the XFC much because they have shown such a commitment to the women’s division, signing more girls, and there are plenty of good fights for me there.”

That commitment to the women is a big sticking point for Kheyfets during a time where women’s MMA is getting bigger but still straddles a line where some continue to look at it as barbaric, while others feel that a cage is no place for a woman. Kheyfets remains optimistic though and feels women’s MMA will only continue to get bigger, and eventually will shed any stigma attached to it.

“Girls always throw down, they always bring it,” Kheyfets said. “Their fights are always the ones talked about and usually get fight of the night.”

“I think as time goes by and with the exposure that women are getting now, people will realize it’s not just two girls in a brawl. They’ll realize it’s athletes with a game plan displaying exciting technique. People won’t see it as a freak show.”

Hardcore fans already know what the women bring to the table, and on March 30, Kheyfets will once again have the opportunity to steal the show at Bellator 63.

3 thoughts on “Bellator 63’s Marianna Kheyfets: ‘I always come out to finish fights’”