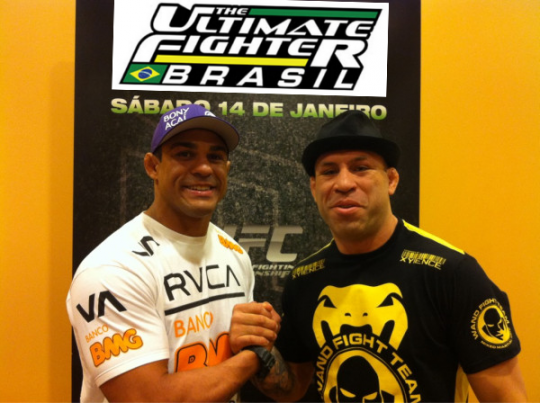 Episode one of The Ultimate Fighter – Brazil featured 16 elimination round fights; eight featherweight and eight middleweight. The winner of each fight moves into the TUF house and will be selected for either Team Silva or Team Belfort.

The episode starts with all 32 fighters entering the Octagon. Coaches Vitor Belfort and Wanderlei Silva walk in next and stand in front of them, letting them know what they signed up for. Then UFC President Dana White enters the Octagon, all the fighters put on headphones where White’s traditional “Do you wanna be a [expletive] fighter speech” is translated for them in real time. White tells them this is the most important moment of their lives.

The fights begin. Here are the results:

Mariano came out strong with nice strikes but Lopes caught him with a counter punch that dropped Mariano. Lopes almost finished him off with strikes but Mariano was able to get back to his feet, recover, and ended up dropping Lopes with a right hook then finishing him off with punches — the replay slo-mo showed Lopes’ eyes roll back in his head as the ref stepped in to stop it.
Leg kick from Goncalves, followed by a left hook. Pepey clinches up and takes Goncalves down but is sweeped almost instantly. Pepey locks up an arm, Goncalves picks him up like he might slam him but Pepey turns it into a triangle armbar and submits Goncalves. Absolutely beautiful.
“Sangue” means blood – Ramos loves blood. Straight left from Ramos. He grabs a collar tie, lands a knee to the body. Viana pushes him to the cage. Ramos jumps guard and goes for an armbar. Viana pulls out and is on top inside full guard where he lands several shots to the body and head. Ramos trying to make something happen from bottom. Viana stands over Ramos and lands a big right while holding his neck with his left hand. More punches to the body then another big right while holding his neck. Ramos kicks Viana off but Viana jumps back on him in half guard before Ramos can get up. Now in full guard Viana lands punches to the body and one, two elbows and Ramos is out cold. He gets in one more big elbow to the face before the ref can stop it, causing Dana White to cry out, “Jesus Christ!” — Man, these fights are good guys!
Round one saw Guerreiro get the better of Damm on the feet and land a couple big shots. Damm eventually got the fight to the ground before the round ended. Round two started similar with Guerreiro winning the stand up. Damm got him down where he eventually ended the fight with a rear naked choke.
Campos may have had a little advantage in the first round with strikes. The coaches were not happy with this round saying both fighters were trying to win by points and scared of not getting into the house. They even called it “boring”. Only fight so far that was not exciting. White looks unhappy. As round two starts Campos lands a nice overhand left but it does little damage as Guerra walks right through it. The second round was similar to the first. Wanderlei said Campos “threw good strikes, but it was kind of dull.” Guerra picked up steam toward the end of the round and it went to a third round which meant the first two were a tie. White was very surprised. Campos landed a nice left and a takedown early then started dropping elbows. However, he couldn’t finish and the fight ended up going the distance. Campos and Guerra argued before the decision was announced. Guerra said that Campos was running away.
Anistavio was getting the better of the striking in the first round before Bueno jumped guard. In round two Bueno was trading strikes when he slipped to the ground on a high kick. Anistavio jumped on him in his guard with punches and got full mount. In the third round it went back to the ground, Anistavio went for an armbar but Bueno escaped. Fight went the distance with Anistavio getting the nod.
After a brief exchange they clinch up and Soldado takes a shot to the groin and time is called. Macapa then takes a shot to the groin and time is called. They are wearing the same shorts. Nice left hook from Macapa then a takedown, full mount, moves to full guard, then armbar, locks it up and Soldado taps out. Beautiful transitions.
Leg kick Nobre. Pancini drops him with a big punch. Nobre goes for a foot but takes some heavy punches. Nobre makes it back to his feet but Pancini lands some big hooks and knocks him unconscious. Wow! Pancini has some bombs in those fists.

Drinaldo came out like a beast throwing heat and dropped Maicon early with a knee followed by a hammerfist. Drinaldo finished him off with several big punches as Maicon laid face down on the ground causing Dana White to squirm and cuss in his cageside seat.
Two big heavy rights from Sampaio but Ferreira stands firm. A couple of leg kicks from Sampaio before Ferreira locks up a collar tie and lands a nice knee that puts Sampaio down. Sampaio goes for an arm but Gerreira gets free and cuts Sampaio open with big elbows and an elbow to the body. The ref stands them up and warns Ferreira about downward elbows to the body. They square up with an exchange before the bell. Big leg kick from Sampaio as the second round starts. Leg kick. Ferreira swings big and misses. Sampaio lands a big left hand and a leg kick. Ferreira shoots picks up Sampaio with a big slam. He then locks on a guillotine and taps Sampaio out. Good stuff! Sampaio is nasty!
Sarafian dropped Moreira early with a punch. Moreira grabbed a leg, tripping Sarafian to the ground, where he locked up a  heel hook. Sarafian escaped and took mount where he dropped some nice punches and elbows. Moreira escaped and as he was standing took an illegal knee to the head. As the fight started back Sarafian landed a big left then caught Moreira with a knee as he shot in. The round ended with Moreira holding Sarafian in a foot lock. In round two Sarafian took Moreira down, mounted him and landed big elbows and punches to the head. It goes the distance and Sarafian gets the nod.
Moraes says he is from the projects in Itaquera, Brazil. Rela comes out striking, lands a nice knee to the body as Moraes clinches up and slams him. Rela goes for a leg. Big right from Moraes on the ground as they scramble and fight for each other’s leg. Rela is brave to engage with the BJJ champion. They are literally having a striking match while their legs are locked up together; elbows, punches, hammerfists. Moraes goes for a foot and taps out Rela with a heel hook. Wanderlei said he had never seen such a fight like this where they were fighting on the ground like this. It was pretty awesome. Moraes says he hopes everyone in the projects is cheering for him.
The coaches loved this fight. De Souza landed a head kick early and took the fight to the ground. Perpetio rallied with strong ground and pound. In round two they exchanged heavily before Perpetuo put de Souza on his back and laid on the punishment. Perpetuo fought and won against cancer and now he has won a spot on TUF Brazil.
Heleno got Galvao to the ground in round one where he went for a guillotine, landed some nice knees on the way up and also went for a rear naked choke but Galvao was saved by the bell. In round two Heleno got the fight down on the mat again and landed some good ground and pound to take the decision.
Bolinho landed some good kicks in round one, dropping Forte to a knee with a leg kick. Forte also landed some big punches and rocked Bolinho. In round two they exchanged some heavy punches and Forte landed some big leg kicks and punches and took the decision. After the fight both coaches and Dana stood up and shook Forte’s hand and congratulated him. He said that was “priceless.” Bolinho said Forte deserved the nod.

Final fight to get into the house. Macarrao lands the first punches and a leg kick. Trindade fights back but gets dropped with a punch. Ref lets him up. Leg kick from Trindade and leg kick from Macarrao. Trindade gets the takedown and Macarrao gets back up quickly. Leg kick from Macarrao and Trindade goes for a single leg. Round two: Leg kick from Trindade and Macarrao counters with punches. Big right from Trindade but Macarrao eats it. Another exchange and Trindade knocks Maccarao’s mouthguard out. Trindade shoots, stuffed, and they exchange several bombs. Trindade shoots again, stuffed. Macarrao gets a body lock from behind. Trindade escapes the clinch and they trade some hard hard punches, you can hear each one landing loudly. Trindade gets a takedown at the end of the round and both coaches and Dana give a standing ovation. Round three: They trade punches and Trindade loses his mouthguard. Ref gives it back and they go back to boxing. Trindade shoots, stuffed. Knee to the body from Macarrao. He shoots for a single, takes a couple hammerfists to the side of the head. He gets up an eats some big punches from Macarrao. Trindade’s hands are hanging down, he is barely able to stand. Both guys are tired but Trindade looks like a zombie. Macarrao loses his mouthpiece but also knocks Trindade’s mouthpiece out. Macarrao gets his mouthpiece back in but the ref has to yell at Trindade several times to put it in until the ref physically has to stick it in his mouth himself. LOL. They go back to exchanging and somehow Trindade manages a desperation takedown with 22 seconds left. He gets mount but Macarrao reverses. Trindade locks on a triangle as the bell sounds. Both coaches and Dana give a standing ovation but Macarrao is awarded the unanimous decision. One of the greatest wars you will ever see. This is the Brazilian version of the Griffin/Bonnar fight x 3. Wow!!!

After the fights Dana White met with the winners inside the Octagon. White was all smiles and extremely elated at what he had just witnessed. The coaches also say a few words and tell the fighters their level is very good and they are a great representation for Brazilian MMA. A new era has begun for the UFC — this is TUF Brazil.

We also get to see a preview of the season to come with guest appearances by some of the great Brazilian MMA superstars and all the drama you would expect.