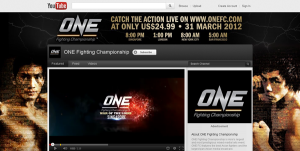 ONE FC is definitely upping the stakes here, giving the millions of MMA fans around the world* free to watch, probably the most stacked card in Asia MMA so far this year, in HD no less.

“As a gift of appreciation to all MMA fans around the world, I have decided to make the broadcast of the entire fight card for ONE FC: War of the Lions on March 31 completely free-of-charge in HD quality on our YouTube Channel. I want the world to see that Asian MMA is back bigger and better than ever! ONE Fighting Championship is Asia’s largest MMA organization with the biggest pan-Asian media broadcast to a potential 500 million viewers across 24 countries. We are here to lead the way in Asia!”

“On this fight card, you will see some of the biggest stars and rising stars in Asia from most of the major Asian MMA organizations like ONE FC, DREAM, URCC, DEEP, etc. as well as from the top Asian MMA gyms like Evolve MMA, Team Lakay, Team MAD, Juggernaut, Muayfit, etc. Tatsuya Kawajiri, Eduard Folayang, Eddie Ng, Kevin Belingon, Zorobabel Moreira, Masakazu Imanari, Ole Laursen, Melvin Manhoef, Yuya Shirai, Yoshiyuki Nakanishi and the rest of the fighters on the card will set Asia on fire on March 31. For this event, we are anticipating record attendance for ONE FC. Several thousand tickets have already been sold for ONE FC: War of the Lions at the Singapore Indoor Stadium. We are expecting a sold-out show.”

WHEN:
“ONE FC: War of the Lions” takes place this Saturday, March 31, at the Singapore Indoor Stadium in Kallang, Singapore and will stream LIVE on Youtube (http://www.youtube.com/ONEFCmma) at 8 a.m. ET (5 a.m. PT).

Here is the trailer for “One FC: War of the Lions”:

* Free live streaming is geo-blocked in Singapore and Japan.