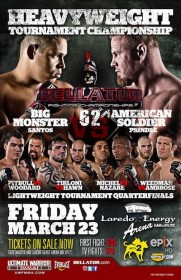 In addition to the main event rematch between season five heavyweight tournament finalists Eric Prindle and Thiago Santos and the season six lightweight tournament quarterfinals, Bellator 62 will showcase a bevy of Texas MMA talent on the preliminary card.

Bellator 62 will air live on MTV2 starting at 7 p.m. CST, with the first fight starting at 6 p.m. CST and streaming live on Spike.com.

Laredo’s own Sonny Luque (1-2) will return to action against Brownsville native Luis Vega (7-2), who is currently riding a six-fight win streak.

Rad Martinez (11-2) returns to the Bellator cage to take on Amarillo’s Douglas Frey (10-7) in a featherweight showdown. Many MMA fans will remember Martinez’s inspirational story on ESPN’s “Outside The Lines”.

Joseph Daily (4-2) tries to put together back-to-back wins as he takes on Dallas native Sean “Black Magik” Spencer (7-1) in a welterweight tilt.

Bellator veteran Steven Peterson (6-1) of McKinney looks for his fifth straight win as he takes on Dallas native Chris Jones (6-1) at featherweight.

Dave Jansen (16-2) will look to take home his third straight win inside the Bellator cage as he takes on Jacob Kirwan (9-3) at lightweight. Jansen submitted both his previous Bellator opponents; will Kirwan be the third?