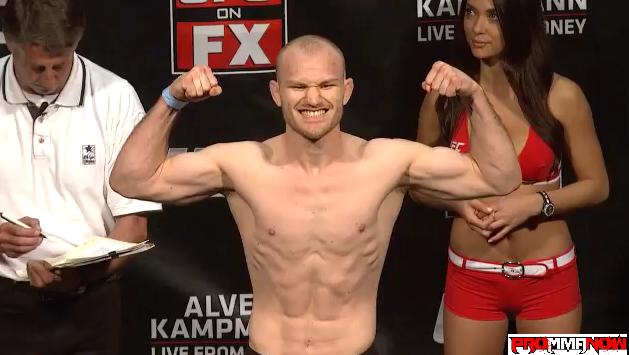 Thiago Alves was cruising toward victory against Martin Kampmann when it happened.

After a blistering flurry that seemed to be the icing on the cake of a dominating performance for Alves, the decision to go for a late takedown in the final minute cost “Pitbull” dearly, as Kampmann locked up a fight-ending guillotine while going to the ground with just 48 seconds left in the bout.

Alves started aggressive as always, stalking Kampmann with leg kicks early. Kampmann responded with very nice, straight counters that setup his first takedown the round progressed. Alves was able to quickly work back to his feet, but was staggered by a front kick as he stalked Kampmann after the reset. Alves recovered nicely, but not before eating a flurry of knees in the clinch from Kampmann. Alves turned the first frame in his favor after securing a takedown of his own and transitioning to a dominant full mount position. Alves worked to maintain top control while landing some measured ground-and-pound as time wound down on a back-and-forth first round.

The second round saw Alves start to turn up the heat, as he landed several lead left hooks in addition to snapping uppercuts as Kampmann struggled to find his rhythm to start. Kampmann again found a home for knees in the clinch, but was outworked in the exchanges as Alves fired off powerful combinations while in the pocket.

“Pitbull” continued his momentum in the final frame, damaging the face of Kampmann with crisp combinations and lead right hands. Kampmann answered with a punch-knee combination that setup another takedown attempt but he was unable to get it against the cage. Kampmann continued to fire off arrow-straight punches, but time-and-time again found himself absorbing big shots from Alves. A late flurry by Alves put Kampmann in danger with under a minute to go. Alves then executed the ill-fated double-leg takedown that ended with him in a guillotine choke. Kampmann continued to apply pressure as they rolled through the takedown, ending up on top while still squeezing. The tap came next, capping off the dramatic come-from-behind victory for Kampmann.

“I felt I really had to finish the fight,” Kampmann said. “It wouldn’t have done me any good just to keep it standing. I thought I had a chance for a submission, and I just squeezed it because I knew that was my window, and I didn’t want to miss it.”

The vastly underrated Martin Kampmann improves to 19-5 overall and 10-4 in the UFC. The heartbreaking loss for Thiago Alves drops him to 19-9 (11-6 UFC).