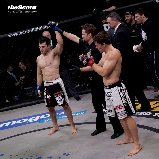 TORONTO, February 29th, 2012 – The Score Fighting Series has announced two additional bouts for its Friday, March 16th event at Hamilton Place Theatre in Hamilton, Ontario. Undefeated grappling wizard Ryan Dickson of Hamilton, On. will take on Brandon Johnson of Grand Ledge, Mich. at welterweight (170 pounds) and unbeaten prospect Elias Theodorou of Mississauga, On. will face off with former United States Marine Erik “The Bull” Herbert of Buffalo, N.Y. in a middleweight (185 pounds) contest.

Former UFC star Rich Clementi’s next bout with The Score Fighting Series, originally slated for the March 16th fight card, has been postponed due to an injury sustained by his scheduled opponent, Kajan Johnson. This was despite efforts to secure an alternative opponent.

The 22-year-old Dickson (2-0), a protégé of MMA icon Jeff Joslin, compiled an unblemished amateur (6-0) record before turning professional, and has still yet to be beaten. In his last bout for The Score Fighting Series on Dec. 3, Dickson finished Josh Taveirne by submission (rear-naked choke) in the second round. He was originally due to fight Christopher St. Jean until injury struck the welterweight from Ottawa.

Johnson is looking to win his first professional bout inside enemy territory. As an amateur, the 24-year-old amassed a stellar record of 10-1, with 7 of his victories coming by way of KO or submission.

The 23-year-old Theodorou (2-0) is a highly-touted striker who has finished both of his professional opponents to date. In his debut on June 17, 2011, he punished Tanner Tolman, stopping Tolman with a series of punches and elbow strikes inside of the opening round of action, and three months later, Theodorou submitted Steve Hodgson with a rear-naked choke in the second stanza of their meeting.

“We both feel confident in our striking and I will rise to the challenge,” Theodorou said regarding the upcoming matchup with Herbert. “I have a pace I don’t think he’ll be able to keep up with. I feel comfortable and confident standing up or on the ground and, no matter where it goes, I will be the one that comes out on top.”

Outside of MMA, Herbert, 25, has competed in the sport of Muay Thai, under both amateur (4-1) and professional (1-0) status over the course of the last five years. While serving in the Marine Corps, he competed for the military branch’s wrestling team.

“[Theodorou’s] more of a Muay Thai stylist, more of a stand up guy but so am I,” stated Herbert. “I don’t have any problem exchanging strikes with him on my feet.”

In 2009, Herbert received an honorable discharge from the United States military, allowing him to maintain a more aggressive training regime and, beginning with his March 16th bout, Herbert said he will be far busier in competition than he has been to date.

Tickets for The Score Fighting Series event start at $30 and are on sale now at the Copps Coliseum box office and online at www.ticketmaster.ca. The entire event will be streamed live on thescore.com starting at 7:30pm.