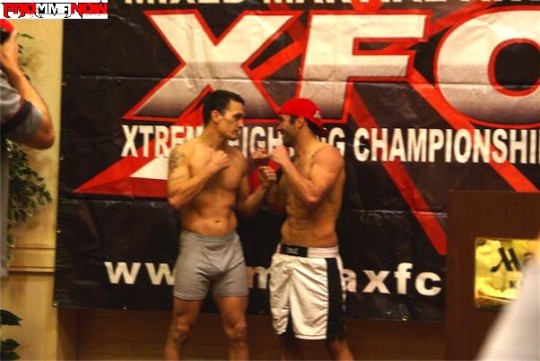 The action was intense last night at XFC 16: High Stakes as Main Event winner, Jamie Varner, capped off a night of huge knockouts in Knoxville, TN. With a 41 second TKO victory over his mentor Drew Fickett, Varner showed the world that the student was too much for “The Master”. Dustin West and Amaechi Oselukwue each made an impression in their HDNet debut with big first round knockouts on the undercard.

Fickett looked for a physiological advantage early on, as he entered the XFC cage with stars drawn onto his chest to mock Varner’s tattoos. The bout started with Fickett throwing a leg kick which didn’t faze Varner. ‘C-4′ then unloaded a big right hand that instantly dropped Fickett. And after a few seconds of vicious ground and pound the ref stopped the contest as Fickett was defenseless against Varner’s relentless onslaught. 40 seconds and a big right hand is all it took for the WEC champ to dominate and have his hand raised.

During the postfight interview an emotional Varner admitted to being nervous coming into ‘High Stakes’. Varner had looked up to Fickett as a teenager and gives him credit as being his mentor in the sport.

In the co-main event of the evening, Josh Samman dominated Mikey Gomez standing and on the ground en route to an impressive first round victory. Samman got the best of the exchanges standing and when the fight finally went to the ground Samman rained down thunderous, Donkey-Kong ground and pound forcing Gomez to tap out to strikes with over a minute and a half left in the round.

The feature bout of the evening saw two of the XFC’s womens flyweights go toe to toe with Marianna Kheyfets defeating Heather Clark when a doctor ruled that Clark could no longer compete due to a swollen eye. During the frantic first five minutes Kheyfets landed a shot to Clark’s left eye that left it swollen shut. In between rounds the cageside physician entered the cage and determined that Clark could not continue, thus giving ‘The Crushen Russian’ her sixth straight win.

The big winners on the undercard were local standouts Amaechi Oselukwue and Dustin West. Fighting on two week’s notice, ‘The Infamous AO’ caught Julio Gallegos with a straight right early in the first round as the XFC fan favorite was throwing a big right of his own. The shot knocked Gallegos unconscious as he fell to the mat and the ref instantly jumped in to save him from any further harm.

West earned an impressive TKO win over Stoney Hale, in the opening bout on HDNet, when he bombarded the East Tennessee native with punches and kicks that sent Hale to the ground. After ‘DWest’ dropped a few bombs, Hale tried to recover but the ref stepped in ending the fight in 83 seconds. West improves to 6-4 and will bring his KO road show back to Middle Tennessee for another XFC event later this Spring.

“We had some really explosive knockouts last night at High Stakes,” XFC President John Prisco said. “Jamie Varner continues to impress me and has shown the world that he is still the guy who was dominant in the WEC a few years ago. Josh Samman proved he is one of the most well-rounded middleweights in the game with his win over Mikey Gomez. Mikey has so much heart and is a gamer, but Samman took the fight out of him. He’s going to be a force at 185.”

“AO and Dustin West really impressed me too on the undercard. Both guys are explosive and have incredible power. They made quick work of their opponents and really provided fireworks early in the show.”