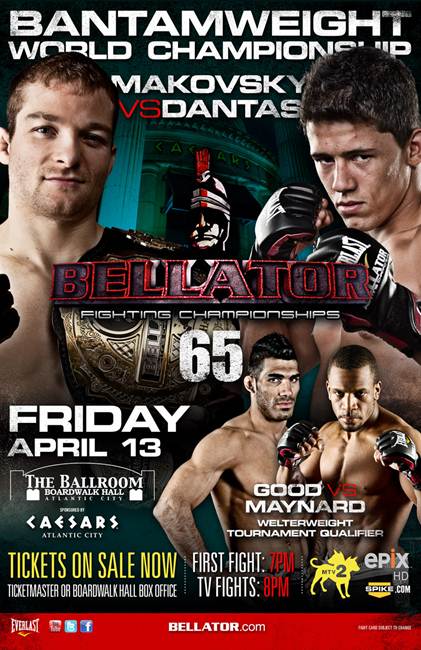 Bellator confirmed the details via press release on Friday.

Dantas commented on getting his shot at Bellator gold:

“I’m here at Bellator to win the Bantamweight Championship. I plan to not only win the title, but to keep it for many years to come.”

Makovsky has won his last eight fights in a row. Since winning the Bellator bantamweight title in October 2010, Makovsky has competed in two non-title bouts while waiting for a contender to emerge.

He knocked out Chad Robichaux at Bellator 41 in April of last year, and returned in October with a submission win over Ryan Roberts.

“I want to dominate everyone I compete against, but at the same time, I don’t feel like I have to make any kind of statement. I just want to continue getting better and do the best I can every time I enter the cage. I don’t pay attention to the rankings because I feel like that’s going to put extra pressure on me. I just look forward to defending my belt on April 13.”

Bellator 65 will also feature the return of Bellator’s inaugural welterweight champion Lyman Good (11-2), who has been on the sidelines for nearly a year. Good will square off against Virginia’s LeVon Maynard (12-8) who is 1-2 in his previous Bellator outings.