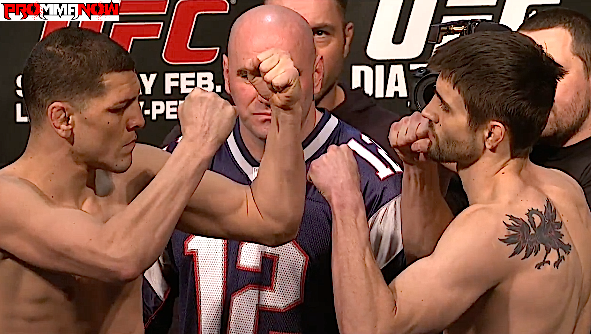 In case you went to bed early last night, around 11 p.m. ET, the exchanges below took place on Twitter. The main entry to take note of is the fourth one from the top, from UFC President Dana White, who confirmed the rumors of a rematch between Carlos Condit and Nick Diaz were true and Condit accepted the fight.

An official confirmation from the Diaz camp has yet to be announced, but White did say in a Tweet Diaz wanted a rematch the very same night at UFC 143. In the first entry below (chronological order) Gracie denied there would be a rematch, but after White confirmed it about an hour later, Gracie then Tweeted, “Things are being reconsidered.”

For everyone who thought Diaz deserved to win the decision over Condit for the UFC interim welterweight title this past Saturday night at UFC 143, it looks as though the Stockton brawler could get another shot. And if you thought Condit was the real winner, he will have the opportunity to cement his position as interim champ.

Don’t expect this rematch to take place in Vegas though, as Gracie feels Diaz can’t get a fair shake from the judges there. Rumors are it could take place Aug. 4 in L.A. as part of UFC on FOX 4, others are speculating the bout could take place in May on Pay-Per-View, but nothing has been officially announced.

UPDATE (Wednesday, Feb. 8, 2:55 ET): Apparently there is an issue in the Diaz camp and this rematch is not happening. Exact details have not been made public, stay close as more information becomes available.