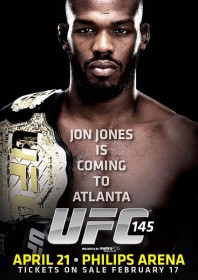 The two will square off in the UFC 145 main event scheduled to take place at Philips Arena in Atlanta on April 21. UFC President Dana White announced Monday via the company website the bout was now official.

Evans has won four straight fights since he lost the light heavyweight title to Lyoto Machida at UFC 98 in May 2009. Unanimous decision wins over Thiago Silva, Quinton Jackson and Davis, plus a second round TKO win over Tito Ortiz has earned him another shot at the crown.

Former friends and teammates at Jackson’s MMA in Albuquerque, N.M., the bad blood between Evans and Jones has been well documented and highly publicized. Evans has since left Jackson’s and currently trains under the tutelage of Coach Mike Van Arsdale with the “Blackzilians” in Boca Raton, Fla.

Since winning the title with a third round submission stoppage of Mauricio “Shogun” Rua at UFC 128 last March, Jones has submitted former champions Quinton Jackson and Lyoto Machida in back-to-back title defenses.

Jones is the favorite at -575 compared to Evans at +375. For the full UFC 145 line-up see ProMMAnow.com’s (www.prommanow.com) Upcoming Events page.

4 thoughts on “Jon Jones vs. Rashad Evans official for UFC 145 on April 21 in Atlanta”