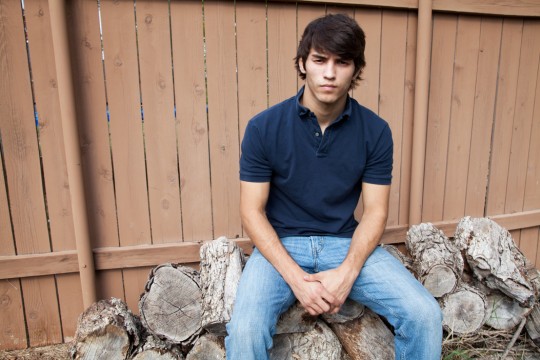 With all of the time and attention focused on today’s top MMA stars and promotions, many fans are probably largely unaware of the struggles that amateur MMA fighters go through in their day-to-day lives for a chance to achieve success and make a name for themselves in the sport.

MTV’s new show “Caged” looks to change that when it premiers on Monday, January 9, at 10 PM ET/PT. Caged follows a group of amateur MMA fighters and documents every aspect of their lives as they prepare for their fights with Ring Rulers, a local promotion that focuses on amateur MMA.

Founded in 2007, Ring Rulers is based out of Shreveport, Louisiana and in the past has showcased up-and-coming amateur fighters like Dustin Poirier (11-1) who now competes in the UFC.

One of the stars of MTV’s new docu-series is Matt Schnell, who goes by his nickname “Danger” on the show. Schnell looks to follow in Poirier’s footsteps and compete in the UFC some day, but before he can realize that dream he must first face some difficult challenges both inside and outside the cage.

ProMMAnow.com’s (www.prommanow.com) Josh Cross recently spoke to Schnell about what fans can expect from the show, what he hopes viewers think about him once it’s over, and what his goals are for his career moving forward.

PRO MMA NOW: Can you talk a little bit about how you became introduced to MMA and what led you to focus on this sport rather than something else?

MATT SCHNELL: Sure. I’ve played sports my whole life. I love to compete and I wrestled a little bit, played some football, and ran track in high school. Then after high school I was just kind of looking for a way to stay in shape and still compete and so I started training mixed martial arts. The first day I went into the gym I fell in love immediately. I got beat up a little bit, learned some stuff and just couldn’t stop from there. I’ve been training ever since.

PRO MMA NOW: What would you say appeals to you about MMA that has kept you training and led to you actually compete?

MATT SCHNELL: You know it’s an individual sport. I enjoy preparing myself to fight and to compete and for it to be mostly on my shoulders whether or not I win or lose. I enjoy that aspect of fighting and I just love to compete. I’ve competed my whole life and MMA is something that you also compete in your own weight-class so it’s not something that I have to fight people much bigger than me. I’ve always been a smaller person when I played football and whatnot it was difficult for me to perform well, but in mixed martial arts I fight a guy my size so it makes it a little more even.

PRO MMA NOW: How did you end up being a cast member on the show?

MATT SCHNELL: I really just lucked out. They happened to be looking for amateur mixed martial artists that were around my age, and that looked exactly like me very close to my hometown. They had a casting call here in Bossier City, Louisiana, which is 10 minutes away from where I live, so me and my best friend just went over and tried out together. They liked us, and we were excited about it, but we didn’t really know what to expect at first. It’s been a long process and in our wildest dreams I don’t think we would have realized that it would have come to this and that we would actually be on TV. It’s been a blessing, and nothing more than that.

PRO MMA NOW: Now the show hasn’t begun airing on MTV yet, but has your life changed any as a result of your involvement with the show?

MATT SCHNELL: Honestly it hasn’t very much other than the fact that I had to quit my job to really do this and do it right. I quit my job to train full time for the show, but other than that my life has stayed pretty much the same. The show didn’t really draw much attention around here and I don’t feel like a lot of people really knew about it. I think it’s going to surprise a lot of people when it comes on TV and they’ll be like, “Wow. That’s here in town. I know that guy.”

MATT SCHNELL: It’s one of those things that we knew going into it that they were going to make storylines out of our lives. It’s not something that I concern myself with. The show is a blessing, and I look forward to it airing. People who know me in the fight game will understand that I’m a hard working kid. It’s a TV show. They had to make a show out of it and we’re excited about it. We feel very blessed and I’m not worried about it in the least bit.

PRO MMA NOW: What do you hope that people take away from the show about you once it begins airing?

MATT SCHNELL: When we started filming the show we started realizing that this was going to be a very public and national thing. Honestly, all I care about is to be well respected and I want to fight. That’s my goal and that’s my dream. I want to be in the UFC one day. My only concern is that people don’t think that I’m not capable of fighting, that I’m not very good or something like that. I would like to be recognized as somebody who one day will be competing at a high level in this sport. That’s my goal and that’s why I decided to do this show. I don’t care what people think of me as a person or anything of that nature. I know who I am. My family and my friends love me, and moving forward I just want to be respected.

PRO MMA NOW: What would you say fans can expect to see from the show as it plays out over the course of this season?

MATT SCHNELL: You know I think this show is different from anything anyone has ever seen. Fighting is a new sport and people don’t understand what the amateurs go through on a daily basis. I think over the years people have made certain stereotypes about fighters and the truth is that we’re not all the same. Everybody is unique and we all have our own stories. It’s the same thing with anybody you run into in this sport. I think people will appreciate the show because it’s raw. It’s just amateur fighters trying to make a life for themselves, and I hope people will appreciate that.

PRO MMA NOW: Looking at your career as a whole, do you have any goals or specific things you want to accomplish moving forward?

MATT SCHNELL: Well there are individual goals I have. I want to get my purple belt in Brazilian Jiu-Jitsu. That’s important. I’ve had my blue belt now for about two years. You’ve got to take it step by step though. Obviously I don’t think I’ll be in the UFC tomorrow or anything like that, but I’d like to win my first few fights and go undefeated up until I do get in the UFC. So I do have small individual goals that I have set aside for myself and I look forward to completing those goals.

PRO MMA NOW: What would be the best way for fans to keep track of what you’ve got going on and coming up in the future?

PRO MMA NOW: Anything else you want to add?

MATT SCHNELL: I’m just excited about everything. I get better every day, and I look forward to competing at a high level in this sport.

For more information about Matt “Danger” Schell and Caged be sure to visit the show’s website at MTV.com.