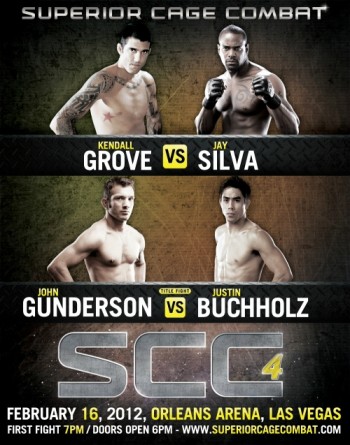 Winner of The Ultimate Fighter season three as a middleweight in 2006, Grove, now 29, went on to go 7-6 inside the UFC Octagon.

After being released from the UFC earlier this year following back-to-back losses, Grove made a successful rebound in August with a first round guillotine choke submission of Joe Riggs at ProElite 1 in Hawaii.

Silva is coming off a unanimous decision win over Gemiyale Adkins at Bellator 44 in May, preceded by a quick 33-second knockout win over Jaime Jara at Tachi Palace Fights 7 late last year.

After only fighting one year as a professional, Silva had a brief, albeit unsuccessful, two-fight stint in the UFC in late 2009-2010.

In addition to the Grove-Silva SCC 4 main event, Superior Cage Combat has also confirmed a SCC lightweight title match between another pair of UFC vets, John Gunderson (32-12-2) and Justin Buchholz (12-6).

Gunderson scored a second round submission win over James Birdsley at SCC 2 in August, while Buchholz is coming off a unanimous decision win over Thiago Meller on the same card.

Buchholz also fought at SCC 1 in May scoring a front kick knockout of Steve Lopez in the third round.

Stay close to ProMMAnow.com (www.prommanow.com) as the full fight card announcement for SCC 4 is expected next week.

Tickets will be available at the Orleans Box Office (888-234-2334), on www.orleansarena.com and on www.superiorcagecombat.com.