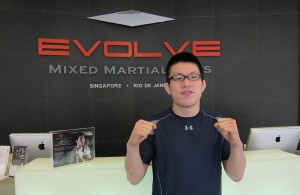 Take a look behind-the-scenes look into the training camp of DREAM lightweight champion Shinya Aoki (29-5, 1 NC) as he prepares for his title defense against Sengoku champion Satoru Kitaoka (29-10-9) at “DREAM: Genki Desu Ka!” on New Year’s Eve in Saitama, Japan.

Accompanied by training partner Ryo Chonan, who is also fighting on the New Year’s Eve card, come fight time, Aoki will have had a full 8-week training camp at Evolve MMA (www.evolve-mma.com) in Singapore.

Aoki has been working on all aspects of his MMA game, including Muay Thai under the tutelage of legendary Thai fighters Namsaknoi Yudthagarngamtorn and Attachai Fairtex. Aoki has long been known as having one of the most dangerous submission games in the sport, but if his striking becomes even half that of his grappling, it could get very scary for his fellow lightweights.