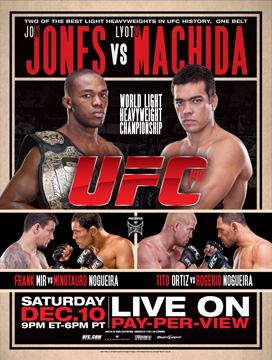 Prior to this coming Saturday night’s “UFC 140: Jones vs. Machida” Pay-Per-View main card, four of the preliminary card bouts will air LIVE on the ION Television network starting at 7 p.m. ET/4 p.m. PT.

The bouts include Krzysztof Soszynski vs. Igor Pokrajac at light heavyweight, Jared Hamman vs. Costa Phillippou at middleweight, John Makdessi vs. Dennis Hallman at lightweight and Yves Jabouin vs. Walel Watson at bantamweight.

“We are excited to give UFC fans four great fights live and free on ION Television this Saturday. We always try to give fans free fights on TV and this is just another example.”

To find out if ION Television is available in your area, visit www.iontelevision.com.

UFC fans who have become accustomed to watching the preliminary card bouts on Facebook will still get to watch three UFC 140 fights live on www.facebook.com/UFC.

The UFC 140 Facebook fights include Nik Lentz vs. Mark Boceck at lightweight, Rich Attonito vs. Jake Hecht at welterweight and Mitch Clarke vs. John Cholish at lightweight.