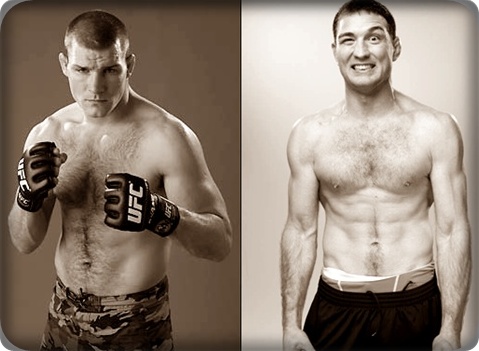 The TUF 14 Finale main event will feature a middleweight bout between the coaches Michael Bisping and Jason “Mayhem” Miller. It”ll be the first time coaches have fought one another in quite some time. This will be Miller’s first time fighting in the UFC since losing to Georges St. Pierre at UFC 52. This bout doesn’t have any title implications. A win for Miller would be huge simply because he hasn’t fought in over a year. A win for Bisping would be his fourth in a row and would likely put him one win away over a top contender before receiving a title shot. Let’s see how this one shakes out.

Jason Miller comes into this fight with a career record of (24-7) with 14 wins via submission and six wins via TKO/KO. Miller was last seen in action over a year ago submitting Kazushi Sakuraba at DREAM 16. Miller has won his last two fights since dropping a decision to Jake Shields back in 2009. Miller is a good fighter, very durable, with his biggest strength being his grappling skills.

Michael Bisping comes into this fight with a career record of (21-3) with 13 wins via TKO/KO and three technical submission wins. Bisping was last seen in action finishing Jorge Rivera at UFC 127 via TKO. Bisping has won three fights in a row and only has two losses as a middleweight. Bisping is well rounded with solid striking and an underrated ground game. His biggest strength is his cardio and high workrate in the cage.

I agree with those odds. I certainly think Bisping should be the favorite to win with Miller being out of action for so long. Also, Bisping has fought fighters with similar skillsets and done quite well against them.

Miller will have to get this fight to the ground at some point if he’s wants a realistic chance at winning this fight. His standup is serviceable, but Bisping’s cardio and work rate would be too much during a five round fight. I’m not sure Miller’s cardio will be up to par and Bisping will constantly make him work in this fight. I see this fight going a lot like Bisping’s fight with Dan Miller in that Bisping will keep the fight standing and and win this fight on the sheer number of strikes thrown.

I doubt he has the power to finish Miller, and Miller is very difficult to put away anyways. I think this fight will be competitive for the first couple of rounds, but Bisping will start establishing control in the third and go on to win this fight via decision.