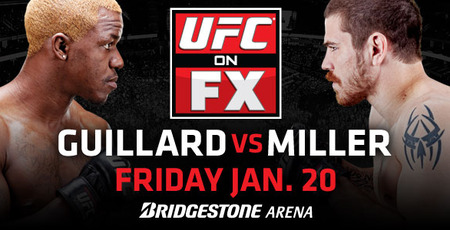 THE UFC® RETURNS TO ‘MUSIC CITY’

UFC® on FX: GUILLARD vs. MILLER

Las Vegas, Nevada – The Ultimate Fighting Championship® announced today that it will return to Nashville, Tenn. on Friday, Jan. 20, as lightweight contenders Melvin Guillard and Jim Miller collide in the night’s main event from Bridgestone Arena.

The Octagon’s return to “Music City” also coincides with the UFC’s first ever event on FX. UFC® on FX: GUILLARD vs. MILLER airs live on the network as part of a two-hour broadcast beginning at 9 p.m. ET/6 p.m. PT.

“For our first live event on FX, we wanted to deliver an incredible fight for the fans and Melvin Guillard vs. Jim Miller should be a war,” UFC President Dana White said. “These are two of the top ranked lightweights in the UFC and both have a lot on the line as they want to get back in the title picture. Miller is known for relentless pressure. There is absolutely no quit in him.

“Dana, Lorenzo and Frank have given us an outstanding card for the inaugural UFC on FX telecast,” said Chuck Saftler, Executive Vice President, FX Networks.  “UFC is a marquee franchise and will be a significant property for the network. Between our live fight cards and the launch of the new version ofThe Ultimate Fighter in March, we’re excited about the UFC joining our lineup and the match-up between Guillard and Miller on January 20th is a great way to kick it off.”

The Nashville card will also feature an exciting welterweight bout between Duane “Bang” Ludwig and Josh “The Dentist” Neer, as well as an explosive heavyweight tilt pitting Pat “HD” Barry against Christian Morecraft.

Tickets for UFC®on FX: GUILLARD vs. MILLER go on sale Friday, Dec. 2 at 10 a.m. CT and are priced at $175, $125, $90, $65, $40 and $25.  Tickets will be available at the Bridgestone Arena box office or online at www.bridgestonearena.com. Tickets are also available online atwww.TicketMaster.com, by phone at 800-745-3000, and at all Ticketmaster outlets including select Kroger locations.  Ticket prices do not include service charges.

UFC® Fight Club™ members will have the opportunity to purchase tickets to this event TODAY, Wednesday, Nov. 30 starting at 10 a.m. CT via the website www.ufcfightclub.com.  A special Internet ticket pre-sale will be available to UFC newsletter subscribers on Thursday, Dec. 1 starting at 10 a.m. CT.  To access this presale, users must register for the UFC newsletter through www.ufc.com.

One of the most exciting and explosive fighters in the sport, Melvin Guillard (fighting out ofAlbuquerque, NM by way of New Orleans, La.) returns to the Octagon® in hopes of igniting another run at UFC gold. With past wins over Dennis Siver, Jeremy Stephens, Evan Dunham and Shane Roller, “The Young Assassin” looks to bring his hard-hitting and crowd-pleasing style to Nashville. The 28-year-old knows a win over Miller will return him to the thick of the 155-pound title hunt.

“The fans in Nashville better be ready for fireworks when me and Miller go at it,” Guillard (46-10-3, 1 NC) said. “I see Fight of the Year written all over this one. I’ve got a lot of respect for him and I know how phenomenal he is inside the Octagon, but I’ve wanted this fight for a while and I’ll be ready.  This is a great opportunity for me and I’m honored to be a part of history in headlining the first ever UFC on FXevent.”

Jim Miller (fighting out of Whippany, N.J.), a black belt in Brazilian jiu-jitsu who holds wins over Kamal Shalorus, Mark Bocek, Matt Wiman and Duane Ludwig, has used his technique to control and finish many of his opponents during his impressive run in the UFC.  A winner of seven of his last eight fights, Miller looks to pick up where he left off and continue his dominance in the lightweight division. Nothing would make him happier than finishing Guillard via submission in Tennessee.

“Melvin has proven that he’s a dangerous opponent, but he’s also proven that his weaknesses can cost him and his weaknesses are my strengths,” said Miller, whose record currently stands at 20-3.  “We’re going to show the fans in Nashville and the fans watching on FX why we were chosen to headline this event. You’ve got two of the best guys in the division in a fight that I highly doubt will go the distance. Don’t blink because this thing could end at any moment.”

After back-to-back wins over Amir Sadollah and Nick Osipczak, Duane Ludwig (fighting out of Denver, Colo.) is looking to keep his winning streak intact by adding another victory to his record of 29-11.  An elite kickboxer, “Bang” will no doubt try to keep the fight standing when he goes toe-to-toe with the always dangerous Josh Neer (fighting out of  Des Moines, Iowa).  “The Dentist” recently returned to the UFC and earned a hard-fought win over Keith Wisniewski in October to bring his record to 32-10-1.

Heavyweight Pat Barry (fighting out of Alexandria, Minn. by way of New Orleans, La.) is known for his exciting bouts no matter the outcome. Equally as entertaining outside the Octagon as he is dangerous inside, “HD” is always on the lookout for a highlight reel knockout.  After participating in two of the most memorable bouts of 2011 against Cheick Kongo and Stefan Struve, Barry (6-4) plans on having his hand raised when he takes on Christian Morecraft (fighting out of Hyannis, Mass.).  Standing 6’6” with a record of 7-2, the Washington, D.C. native has made an immediate impact in the UFC, including an impressive submission victory over Sean McCorkle last March. He now has his sights set on Barry to kick off the New Year.