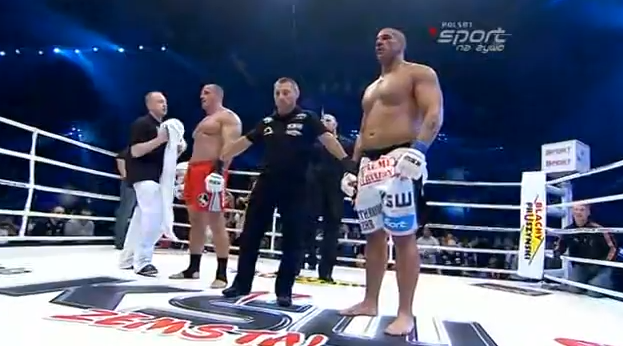 LODZ, Poland — In a rather shocking turn of events following the “KSW 17: Revenge” card that took place over the weekend, the co-main event bout between Polish strong man Mariusz Pudzianowski and James Thompson has been changed from a majority decision win for Pudzianowski to a “No Contest”.

KSW Federation held a press conference Monday regarding the judges’ original ruling of a majority decision win for Pudzianowski, a decision which few people who saw the fight seemed to agree with, including ProMMAnow.com (www.prommanow.com) who scored the fight a draw during our KSW 17 LIVE results and play-by-play.

According to KSW officials there was miscommunication between the judges and the referee for the bout. KSW’s official rules state that in cases where the judges declare a standard two-round fight a draw, the bout continues with an overtime round. This rule does not apply to championship fights or other fights signed for a different number of rounds.

The KSW 17 bout between Pudzianowski and Thompson was a standard two-round fight and was scored as follows:

According to the official judges’ scores the fight should have gone into overtime. However, what happened instead, according to KSW’s official statement, was Judge Piotr Baginski “conveyed a scorecard in favor of Pudzianowski to the in-ring referee, whereas in fact he had scored the fight for Thompson”.

At that point Pudzianowski was declared the winner by majority decision. Of course, Pudzianowski’s home crowd in Atlas Arena seemed pleased with the win but Thompson made post-fight headlines when he grabbed the announcer’s microphone and voiced his profanity-laced displeasure at what he felt was an unfair decision.

How such an error in communication between the judges and the referee could happen when there were only two rounds is anyone’s guess. But due to the fact the overtime round did not take place, KSW owners and officials have decided the right call is to rule the fight a “No Contest”.

“KSW Federation would like to apologize to both fighters as well as MMA fans all over the world for failing their trust and promises that KSW officials will do everything in their powers to eliminate such procedural errors in the future. First efforts to improve the communication between the judges and the referees during KSW events will be made this week.”

Now the question remains if Pudzianowski and Thompson will meet for yet a third time. Prior to their fight on Nov. 26, Thompson submitted Pudzianowski via arm triangle choke in the second round at KSW 16 back in May.

A third meeting between the heavyweights seems inevitable at this point.

Hopefully KSW can avoid these types of mishaps in the future. When humans are involved, there is always the chance for error, but high profile errors like these can raise suspicions of impropriety, especially in locales and with promotions that do not operate under the governing of an athletic commission.

If you still have not seen the fight you can watch it here and judge for yourself who you think deserved to win, or if it should have gone into overtime: KSW 17 fight video: Mariusz Pudzianowski vs. James Thompson.

UPDATE (10:44 a.m. CT):  KSW”s correction needed a correction. Today’s original statement had Judge Leszek Pawlega scoring the fight a 20:20 Draw. A new statement has since been received indicating it should in fact be: 19:19 Draw.