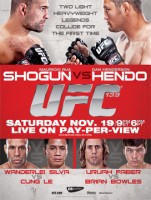 UFC 139 headliners Dan Henderson and  Maurico “Shogun” Rua, along with co-headliners Wanderlei Silva and Cung Le, took part in a media conference call Wednesday to help promote Saturday’s fight card which will air LIVE on Pay-Per-View from the HP Pavilion in San Jose, Calif. Press play in the player to listen to the audio from the call and select quotes from the fighters are posted below.

“I’m going to finish up my career in the UFC and I am excited by it; and the fact the UFC has a huge FOX deal now makes it even more exciting. I am not going to worry about my next fight – as far as getting a title shot – I need to win this fight and then the rest will take care of itself. I need to win in the Octagon this weekend first before I talk about what’s next. Shogun is a very dangerous opponent; this is a fight I wanted to happen years ago in PRIDE and he’s a name that will look good on my record.

“I feel I have got a lot of fights left in myself. I am 41 and feel great. I’m not putting a time limit on anything. I think I can put a game plan together to beat anyone out there. I am aggressive throughout the whole fight and always trying to finish a fight, although Shogun is very good and well-rounded so that will be a challenge to do.

“I am not thinking about (light heavyweight champion) Jon Jones, but I’ve given it a bit of thought and that’s a fight I think I can win. I’m thinking more about the belt, and beating Shogun gets me in line to fight for the UFC belt again. I don’t know which belt I’d rather have a shot at (middleweight or light heavyweight), but that’s something I will think about after I beat Shogun.

“I’m happy with the form I am in, where I am in my career, and I’m confident. This is going to be a big night for me.”

“Henderson is a guy with great history in the sport, he’s a big fight for me. My main goal is to win the belt back, but you have to focus yourself on someone like Dan Henderson 100 percent when you fight him. So I am not thinking about the belt right now other than I need to win this fight to get to the belt.

“This is a marquee fight for me – a very important fight. Dan Henderson is a legend in MMA, he was a two-weight champion of PRIDE, and a champion of STRIKEFORCE. He’s a guy with a big history in the sport and this fight means a lot to me.

“I came very close to fighting Henderson in PRIDE, on two occasions. But these fights never happened. This is a great fight. It could have been a huge fight in PRIDE in 2006, and it is a huge fight in the UFC now.

“I watch that 2001 fight between my brother (Murilo ‘Ninja’ Rua) and Dan Henderson a number of times. And it was a very competitive fight (Henderson won via split decision). My brother was one of the people that helped me a lot during my strategy planning for his fight against Dan.

“I’m a hundred percent recovered from my injuries. It was very tough to stay sidelined for one year without competing, but this is my third fight in 2011 and I feel good. As a fighter, I like to stay active and stay busy and thank God I’m recovered from my injuries so I can keep this rhythm going and keep fighting. I felt 100 percent against Forrest Griffin and I’m very happy to fight again three months later. I like being active.

“I have worked a lot on speed. I beat Forrest Griffin with speed and I think speed will be the difference in this fight at UFC 139. I will press forward against Henderson. It is my style, I have always fought this way, the fans love it and I am very successful with it. If I go forward, I can’t see myself losing this fight.”

“I think my performance in this fight will (allow) me to fight again. I don’t want to retire and I know that if I perform like I do in the gym, I will make everyone happy. What happened in my last fight (versus Chris Leben) can happen to anyone in MMA. You can’t tell Cain Velasquez he should retire now because he got knocked out. Anyone can get knocked out early, one punch early finishes the fight.

“This is a great match with me and Cung. I know it will be a great show for the fans. We both have attacking styles. We both fight. He is a really good fighter, I saw his tapes, I studied his game and it’s so hard to find some guys fight like him. We brought in some guys from Taekwondo and from all the other martial arts to try to help me prepare for Le’s style.”

“It’s great to have the chance to fight on such a huge card. I am very focused on this fight. I’m not thinking about the future, just enjoying the moment of fighting in the UFC. After my last fight, I got put on hold for a while with fighting even though I wanted to fight right away. I got busy with movies, but then I had the chance to fight in the UFC. Everything happens for a reason. I could have hung up my gloves and done movies, but I am a fighter first and actor second.

“Of course, the UFC is the top of the food chain; they are the ones who put MMA on the map. I’m very excited to fight for the UFC. It has worked out so well, I get to fight for the UFC and fight in San Jose. It is full circle: I had my first MMA fight here and now my first UFC fight. I have all my friends from high school and my friends from junior high all coming out and hitting me up for tickets. It’s great and I believe everything happens for a reason.