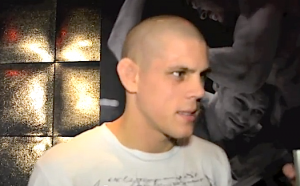 UFC lightweight Melvin Guillard (29-9, 1 NC) was on a five-fight win streak and moving in on a title shot before running into TUF 5 veteran Joe Lauzon (21-6) at UFC 136 last month.

Refusing to be a stepping stone for the possibly overly-confident Jackson’s MMA knockout artist, Lauzon attacked fast and early and landed a left hook that rocked Guillard. Lauzon pounced, took Guillard’s back, locked on a rear-naked choke and forced the tap just 47-seconds into the first round.

It was a clear reminder of just how talented the 27-year-old Massachusetts native is and was only one second faster than the first round knockout he scored against Jens Pulver at UFC 63 in his Octagon debut back in September 2006.

ProMMAnow.com (www.prommanow.com) reporter Joe Gugelman recently caught up with Lauzon at the UFC Undisputed 3 pre-launch party in Las Vegas to talk about the release of the new game and his win over Guillard. Lauzon revealed when he could return to action and who we could see him fight next inside the Octagon. “J-Lau”also explained his main goal for the foreseeable future and what he feels his biggest obstacle has been to reaching that next level.