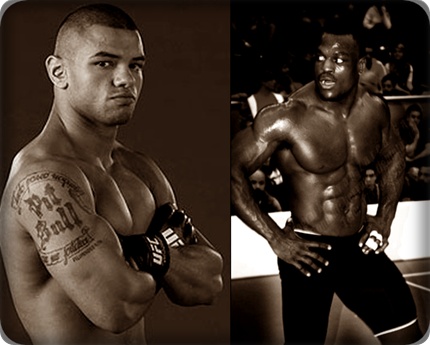 The UFC 138 event will feature a welterweight matchup between long time top ten welterweight Thiago Alves and UFC newcomer Papy Abedi this Saturday in the United Kingdom. It’s an important fight for both fighters. If Abedi is able to best Alves he just beat one of the best welterweights in the world in his ninth fight. If Alves wins, he avoids having back to back losses for the third time in his career. Let’s see how this one shakes out.

Papy Abedi comes into this fight with a overall record of (8-0) with 5 wins via TKO/KO and 2 wins via submission. Abedi last fought in October 2010, winning via submission in the very first round. Abedi appears to be a competent striker that’s a southpaw with a judo background. Apparently he is a purple belt in jiu-jitsu as well.

Thiago Alves comes into this fight with an overall record of (18-8) with 11 wins via TKO/KO. Alves was last seen in action back at UFC 130 losing a unanimous decision against Rick Story. Alves is a huge welterweight with very good muay thai skills that fights very aggressively. The book on him is to either put him on his back or crowd him with constant pressure which negates his potent striking attack.

Those odds are probably about right. Abedi hasn’t fought in over a year and he’s still a pretty green fighter taking on a veteran top ten welterweight.

I honestly don’t know much about Abedi, but I have watched some film on him and picked up on a few things rather quickly. He obviously is talented, a southpaw, and has the ability to finish fights. However, stylistically I don’t this matchup favors him at all against Alves. Abedi’s stance makes him very vulnerable to leg kicks and that is one of the strengths of Thiago Alves. He has devastating leg kicks, just go back and watch his fight with Josh Koscheck. Also, the long layoff has to be a concern as I’m a firm believer in cage rust. Abedi has a background in judo, and it may smart to close the distance against Alves the same way Rick Story did. The only downside to that is Abedi would be forced to eat heavy strikes, and unfortunately everyone does not have a granite chin like Story.

I expect Alves to really be on a mission in this fight. He can’t afford to lose two fights in a row, and definitely not to a young prospect like Abedi. I think he comes out aggressive with leg kicks on the lead leg of Abedi which will set everything else up once he finds his range.

I think Alves wins a dominant decision or to finish Abedi late in the fight via TKO.