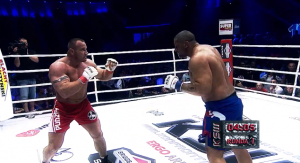 Five-time World’s Strongest Man Mariusz Pudzianowski (3-2) will get his chance at revenge against MMA veteran James Thompson (16-14, 1 NC) on Nov. 26 at KSW 17 in Poland.

In the following extended video preview of the event, “Pudz” describes what went wrong in their first fight at KSW 16 back in May, and says the adrenaline and emotion overtook him and he beat himself by gassing out.

“Pudz” says he knows he has lost twice now because of the same reason and it may be hard for the fans to expect something different from him, but the strong man also says he knows what it takes to reach the top and don’t write him off just yet.