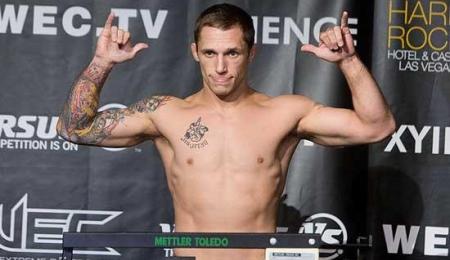 It’s been more than seven years since Jeff Curran (33-13-1) lost a unanimous decision to Matt Serra (11-7) at UFC 46 and was subsequently cut from the organization.

Since that time the 34-year-old has gone on to win 19 of his last 25 fights and now finds himself back in the UFC.

But when Curran steps back into the octagon later this month, some 2,828 days after his last appearance there, he will no longer be fighting to make it back, instead he’ll be fighting to stay.

On Saturday, October 29, Jeff Curran will make his UFC return when he takes on Scott Jorgensen (12-4) at UFC 137 emanating live from the Mandalay Bay Events Center in Las Vegas, Nevada.

ProMMAnow.com‘s Josh Cross spoke with Curran about his upcoming fight, what it’s like being back in the UFC, and what he is excited to do once he retires.

PRO MMA NOW: Starting off can you talk about your training camp for your upcoming fight and how that has been going?

JEFF CURRAN: Training camp is going really good. The biggest percent of the time I’m just working with my fighters that I’ve trained over the years. They all have something different to bring with them. I’ve got a couple of really good wrestlers that are the exact size as Jorgensen. They’re just really strong. They’re both really experienced fighters as well and they have been with me for a long time. They spend every day and every session with me pretty much just keeping me honest and keeping me on my toes with certain things. Then I also did have Waylon Lowe, a four-time UFC vet , who came in and spent some time with us. He is probably coming back next week for a month or so too. He has sharpened me up and he has seen some things that I could do to just help my wrestling game offensively and defensively. But other than that it’s just business as usual.

PRO MMA NOW: Now you’re going to be taking on Scott Jorgensen at UFC 137. How do you feel that you two sort of match up going into this fight?

JEFF CURRAN: He’s like me. I like to fight on the ground, but I’d rather stand up and trade. I’m expecting him to for the most part be like the normal Scott Jorgensen who wants to stand up. So hopefully we’ll get out there, let it all out, and put on a fight of the night type event.

PRO MMA NOW: Knowing how tough Scott Jorgensen is do you think that the best way for you to finish the fight would be to take it to the ground?

JEFF CURRAN: You know he has been knocked down but he has never been knocked out, but at the same time he has never been submitted either so finishing him on the ground and finishing him standing up are both a big accomplishment if I could do either one. More importantly I just want to try to fight my fight and whatever the way I feel now is going to be different tomorrow and different in the second round until I get out there and experience him a little bit.

PRO MMA NOW: Do you think that experience will play a role in this fight seeing as how you have many more fights under your belt than Jorgensen?

JEFF CURRAN: Scott is not one of those guys that seems to let his nerves get to him. I might have more fights than him, but he has got a competitive wrestling history that dates back his whole life. He knows how to deal with competition. As far as actual ring time and ring experience yeah I’ve been in the worst of worse situations and come through it. I don’t think it plays a negative role against Scott, but it definitely gives me a personal advantage knowing that this is just another fight, this guy is human, and I have a chance of winning it at all times. Just knowing that gives me peace of mind to go in there and try to get my job done.

PRO MMA NOW: Now it has been seven years since you were last in the UFC. What was going through your mind when you found out that you would be fighting for them again?

JEFF CURRAN: Well there was like one more event after I fought in the UFC that had lightweights and then they cut it. So I was never like I’ve got to get back to the UFC because the WEC was coming around the corner. I kind of look at it like I left the UFC when I left the WEC because it was the same staff and the same production and stuff like that. So it was really hard for me to swallow being cut from the WEC and then watching the two companies merge because at that point I knew that it wasn’t going to be an easy road back. I just wanted to be among the best in my weight class and it didn’t matter if it was with the UFC or the WEC. I just wanted to be back there and now that it’s actually the UFC brand it’s all that much better.

PRO MMA NOW: With MMA evolving and growing in popularity as much as it has in the past seven years, what would you say you’ve noticed that has changed the most in the sport since you were last in the UFC?

JEFF CURRAN: MMA in general is still growing in popularity but the UFC by itself is a whole different animal. The buzz around other organizations that are doing pay-per-views, HDNet type fights, and stuff like that is still that local crowd coming out to support local fighters. Maybe there is a little bit extra, but it’s not the same as the UFC fan base. So it’s really good that I can land a job with the biggest and most known organization in the world. They’re definitely the front-runner for the sport in general so there is a huge difference in the fan base.

PRO MMA NOW: Sort of looking into the future, is there anything else that you want to specifically accomplish in your career other than say making a run for the title at some point?

JEFF CURRAN: Yeah, I want to expose my school, my team and my staff. We’re producing one quality fighter at a time it seems. I don’t have 50 people out of the gate hitting the big show, but it seems like we’re making real big waves as far as getting people out there and building my team to where it’s going to have that top team status. I would just like to be known as one of the best in the world as far as that goes and as a coach. Anything that I do I just want to do the best that I can. I think coaching is one area where I’m going to definitely thrive and do really well at as soon as I’m done. I can’t wait until the day that I retire and see what kind of coach I can be when all I have to do is focus on my fighters. So as far as MMA goes, coaching, my school in general and my competition team is a huge inspiration of mine. Hopefully freeing up a little bit of time so I can have more time to spend with my family would be nice too.

PRO MMA NOW: What would you say would be the best way for fans to keep track of what you’ve got going on?

JEFF CURRAN: I have a Twitter (@BigFrogBJJ) and I do try to stay up to speed on that a little bit. I also have a Curran Martial Arts Academy and a Jeff Curran fan page on Facebook. It’s me on there and I usually try to get to everybody’s questions if they have any and if I have any cool pictures or videos I try to post them. I’m not a socialite on it but I am pretty active.

JEFF CURRAN: You know I really want to thank my staff here at Team Curran and all of my partners that really just are allowing me to do what I do. I also want to thank my wife Sarah. I want to thank Monte Cox my manager for staying on top of things and getting me back where I belong.  Also I want to thank another manager of mine, Brian Butler from SuckerPunch. He gets all of my sponsors going and everything like that. I just want to thank those guys for what they do. As far as sponsorships go, there is a list of guys but I’m not sure how confirmed everything is, so I’ll try to button that up as we get closer to the fight.

PRO MMA NOW: Anything else?

JEFF CURRAN: I just want the fans to know that it has been a long struggle for me to get back to where I have and I can’t even begin to describe in words the sacrifices and the strains that I have put on in my physical and my mental health over the past few years building my weight back to where I am. I just really hope that everyone comes out to support me, see what the hard work has done, gets behind me and rallies towards the finish line.