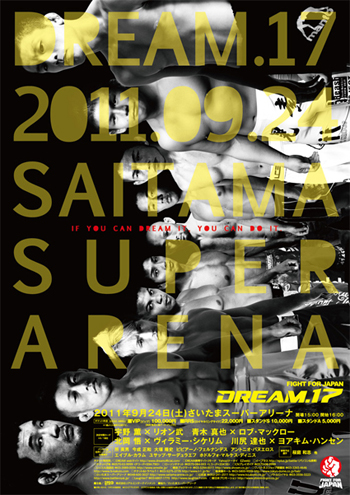 DREAM 17 took place on Saturday, Sept. 24, at the Saitama Super Arena in Saitama, Japan, and featured the opening round of DREAM’s Bantamweight Grand Prix. It was also the premiere for DREAM’s new three five-minute rounds rule.

In the main event, Shinya Aoki proved once again why he is considered one of the top submission fighters and top lightweights in the world by defeating former WEC lightweight champ Rob McCullough via first round submission due to neck crank.

It was Aoki’s sixth straight win and his fifth submission victory since losing to Gilbert Melendez via unanimous decision at “Strikeforce: Nashville” in April 2010.

Legendary Japanese fighter Kazushi Sakuraba, now 42, dropped his fourth straight bout, tapping out to and arm triangle choke to Brazil’s Yan Cabral in the second round of their welterweight match-up. The 28-year-old Cabral improved his undefeated record to 10-0.

Check out the fight between Shinya Aoki and Rob McCullough right here: