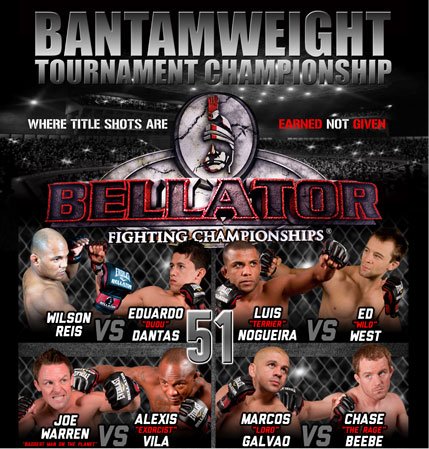 Join us here at ProMMAnow.com (www.prommanow.com) as we bring you LIVE play-by-play commentary for each bout.

Round 1 – Head kick just misses by Ed. Luis throwing combos, but Ed steps back and fires off another kick. Right hand from Ed and as he steps back, Luis comes forward with a nice lead left hand. Jab Ed. Another kick, he looks really confident on his feet. Luis gets inside and throws a 3-punch combo. Switch kick from Ed. Kick to the body from Ed. He’s dominating the stand up so far. Ed changes stances, then fires off a kick. Luis lands a big left hook, then a right hand to the body. Ed clinches, gets the take down. Luis is controlling the wrists of Ed from his closed guard. Not much action as Luis is tying up Ed, and controlling his posture. Ed gets free for a moment and gets a few right hands to the body in. Body,head from Ed. Back to the feet now. Left hook, big body shot from Luis as Ed ducks in for a take down. Big kick, clinch and knees from Luis. More knees in the clinch from Luis, but too little too late. 10-9, Ed West.

Roun 2 – Luis coming forward, kicks from both fighters. Luis up top with the kick. Luis closes throwing looping hooks as Ed circles out. Both guys score again with kicks. Leg kick from Luis, and Ed counters with a right hand. Superman punch from Ed, clinch, and knees from both. Switch kick again from Ed. Clinch from Ed, Luis turns and puts Ed against the cage. Goes for the body lock take down, but Ed stays on his feet. Double underhooks from Luis, and then he breaks and steps away. Luis with the left, Ed counters with his right hand. Luis changes levels, shoots, and gets the take down. Ed gave that up pretty easily. Bodyshots from Luis. Ed throws up his legs for an armbar but Luis sees it immediately and postures up, and then gets to his feet. Big right hand lands flush for Luis, then he shoots again and puts Ed against the cage. Ed turns and puts Luis against the cage. Fight for position now, as Luis presses Ed against the cage and lands some short knees to the thigh. Under a minute to go now. So far Luis is winning the round. Luis comes with the flying knee at the bell. Round 2 goes to Luis Alberto Nogueira, 10-9.

Round 3 – Jab, left hand from Ed. Luis lands two right hands as West steps back. Push kick from Ed. Luis lands with an uppercut, and just misses with the follow up left hook. Jab, body kick combo from Ed. Luis is stalking. Flying knee, and Luis puts Ed on the cage. Ed clinches, and lands a grazing knee to the head of Luis. Both guys are fighting for position and control against the cage. Luis with knees to the thigh. Ed gets his back off the cage and steps to the center of the cage and fires off more kicks. Leg kick from Ed, but Luis counters with a right hand to the body and a left hook. Ed with a one, two combo. Nice 3-punch combo from Ed. Luis lands one, Ed lands three. Clinch again with just under 2 to go. Very close round, and this one will likely determine the bout. Ed with the head kick. Luis coming forward, lands a right hook. Clinch again on the cage. Luis goes for the bodylock take down but Ed stays on his feet. Luis finally elevates Ed and gets him to the ground, but he pops right up. Again, Luis lifts him and puts him on the ground. He’s back up with ten seconds to go. Nice combo from Ed, then a kick just before the bell. Very close fight. I’m giving the round to Ed West, and the bout overall to him as well, 29-28.

Round 1 – Chase with the jab, right hand right off the bat. Beebe again with a leaping right hand. Marcos lands a nice stiff right hand, then puts Chase on his back. Chase scrambles out, but Marcos takes his back, but then gets reversed by Chase. They stand up, and Chase locks up a standing guillotine, then pulls guard to look for the finish. It looks tight, but Marcos works his head free and then grabs an arm and jumps going for the arm bar. Chase scrambles, and gets to his feet. Marcos leans in again, and once again gets caught in a standing guillotine. Chase goes to his back again looking to finish. Chase still looking to squeeze and get the tap, but Marcos is out again. Huge diving right hand lands on the jaw of Chase. Up kick from Chase. Big right hand from Marcos. These guys are scrambling like crazy on the ground. Back to the feet. Plum clinch and knee from Marcos. Chase fires an uppercut between the elbows of Marcos. Very exciting first round. Winging left hand connects for Marcos. Huge uppercut just barely misses from Marcos. Chase clinches, puts Marcos on the cage with less than a minute to go. They separate, and then Marcos comes flying with a kic, then lands a big right hand. Big leg kick from Marcos, knee, then clinch. Round 1 goes to Marcos Galvao, 10-9.

Round 2 – Big right hand for Marcos right out the gate. Clinch from Marcos, right hand to the body, and he gets the take down. Chase looks to escape out the back door, and does scrambling to his feet. Another big leg kick from Marcos. Winging uppercut just misses again from Marcos. Winging, wide right hand lands, and another. Chase scores with a straight right hand. Leg kick again from Marcos. Another right hand from Marcos. Chase is throwing the cleaner, straighter punches, but Marcos is landing more, and mixing in kicks that are scoring. Chase throws a right hand, then ducks and gets the body lock. He’s working to get the fight to the ground, but Marcos is still on his feet. Marcos instead gets the take down, and then gets to side control. Chase hip escapes, but is still on the bottom with Marcos in his full guard. Chase lands an up kick that lands flush, but it’s illegal as Marcos is grounded. They stop for a second, and Chase apologizes, and they get back to it. Marcos moves to side mount and is landing elbows to the body. He’s dominating the round so far with half a minute to go. Chase scrambles but ends up in a guillotine. Marcos lets it go and takes his back, then they break and stand just before the bell. Round 2 goes to Galvao also, 10-9.

Round 2 – Reis comes out swinging. Dantas with a superman punch. Push kick, Dantas. Leg kick from Reis after he feints his jab. Again. Dantas counters the leg kick with the right hand. Reis catches the kick, but Dantas frees his leg. Dantas with a flying knee that lands right on the chin of a ducking Reis and drops him!!! A couple of hammerfists ends it! Dantas wins by TKO.

Round 1 – Head kick from Vila. Another. Joe is flashing his jab but not closing the distance to land it. He’s coming forward now, but Vila is quick. Vila with a big right hand sends Joe into the cage. Two more left hands and he clinches. Joes is trying to shake out the cob webs. They separate, and Vila lands a HUGE left hook and it’s all over!! One-punch KO for Vila!