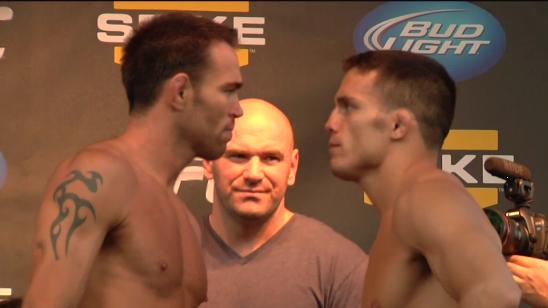 All fighters made weight without incident although Alan Belcher needed the towel brought out so he could shed every stitch of clothing to make the middleweight non-title fight limit of 186 pounds. His opponent, Jason MacDonald, weighed in at an even 185 pounds.

Welterweight headliner Jake Ellenberger weighed in at an even 170, while Jake Shields tipped the scales at 171 pounds. The action kicks off Saturday night LIVE on Facebook with the prelims starting at 5:30 p.m. ET / 3:30 p.m. PT and the main card airing LIVE on Spike at 9 p.m. ET / 6 p.m. PT.

The full weigh-in results are as follows: