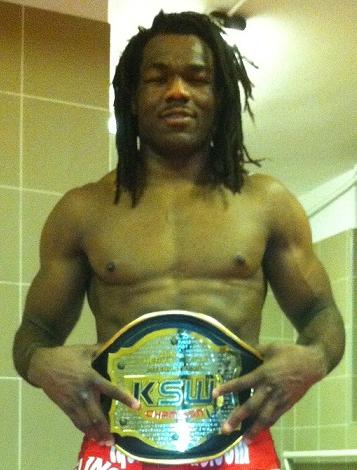 Team Quest’s Reameau Thierry Sokoudjou has signed a multi-fight deal with Canada’s Maximum Fighting Championship and will face reigning 205-pound champ Ryan Jimmo for the title at MFC 31 on Oct. 7 in Edmonton.

A judo black belt and champion, Sokoudjou (12-8) burst onto the MMA scene in a big way with back-to-back first round knockout wins over Antonio Rogerio Nogueira and Ricardo Arona in Pride in 2007.

He then signed on with the UFC where he went 1-2, and his career has been up-and-down ever since. He did however manage to pick up KSW’s light heavyweight title with a second round TKO over Jan Blachowicz at KSW 15 in March.

Sokoudjou is currently riding a three-fight win streak for the first time in his career, most recently winning a unanimous decision over Roy Boughton at the Score Fighting Series in June.

Jimmo (15-1) is on a remarkable 15-fight win streak, his only loss being in his pro debut back in Feb. 2007. Jimmo has 10 fights under the MFC banner, most recently scoring a third round TKO over Dwayne Lewis at MFC 28 in February to win the vacant light heavyweight title, and then scoring a unanimous decision over Zak Cummings at MFC 29 in April in what was his first title defense.

“I am extremely excited to see what happens when Jimmo and Sokoudjou collide. I truly believe it will be the most explosive title fight ever in MFC history. Ryan is a terrific champion and represents the MFC like no other fighter ever has before. Now we’re going to see how he handles the athleticism and pressure that Sokoudjou will put on him.”

“MFC 31: The Rundown” will take place Friday, Oct. 7, at the Mayfield Conference Centre in Edmonton, Alberta, and will broadcast LIVE on HDNet starting at 10 p.m. ET/7 p.m. PT.