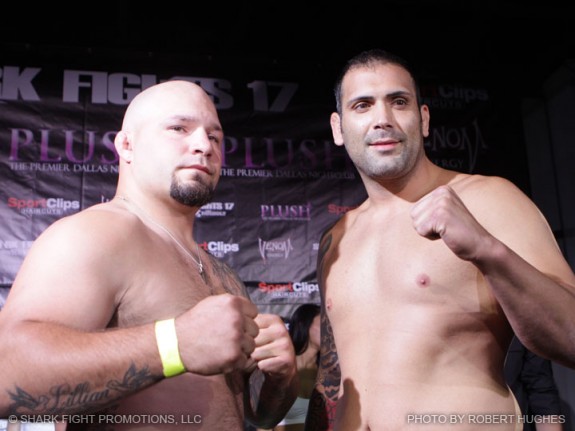 DALLAS — SHARK FIGHTS 17 takes place this evening at The Dr. Pepper Arena in Frisco, Texas, and will broadcast LIVE on HDNet at 10 p.m. ET/7 p.m. PT. ProMMAnow.com will provide LIVE play-by-play results and commentary of the event.

However, Karl Knothe, who was scheduled to face Ricco Rodriguez at a 230-pound catchweight in the co-main event, did not make weight and has since been replaced by Doug Williams, who was originally scheduled to fight Danniel Almeida on the undercard.

There were other fighters on the card who also failed to make weight. Featherweights Erik Perez, Victor Hernandez and Quaint Kempt all failed to make their 146-pound limit and their bouts have been changed to catch weights.

The full weigh-in results are as follows: