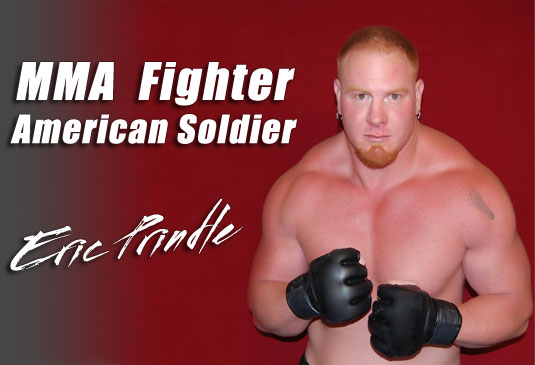 When Eric Prindle (7-1) made his Bellator debut this past April, he didn’t take it easy on his opponent and friend Josh Burns (6-4). After just two rounds the doctor stopped the fight and Prindle was declared the winner.

His performance was so impressive that Prindle, a former Army TOW gunner, was named as one of the competitors in Bellator’s upcoming Season 5 heavyweight tournament.

Despite not knowing who his opponent will be or when exactly he will be fighting, Prindle continues to train fervently in hopes that one day he will become the Bellator Heavyweight Champion.

The “American Soldier” spoke with ProMMAnow.com‘s Josh Cross this past week about how his MMA career has benefited from his time in the Army, how he’s training for the heavyweight tournament and what he thinks about a possible fight with Bellator Heavyweight Champion Cole Konrad.

PRO MMA NOW: Can you talk a little bit about your background and how you got involved in MMA?

ERIC PRINDLE: When I was about 12 or 13-years-old, since I was a pretty big kid I fought grown men and never lost a kickboxing match. [I] went into the Army, boxed in the Army, went to Armed Forces, won all Army and Armed Forces, went into WCAP (World Class Athlete Program) which is a world class athletic program and won that five years in a row. Went to Armed Forces and won that, and went around the world boxing. Basically my job was to get to the Olympic trials. Then [when I] got out of the Army I was at a friend’s house and we were watching some heavyweights fight in the UFC and I said I can do that. [My friend] actually had a gym and I went and bet them pretty much that they couldn’t do anything with me and I could hit them and knock them out and basically all their guys I beat up and just started from there.

PRO MMA NOW: How would you say that the time you spent in the Army has benefited your MMA career?

ERIC PRINDLE: Definitely. For one thing, one of the other reasons why I do MMA is for the camaraderie of your fellow fighters and teammates. Also, another thing that I learned in the Army was just always to do my best and pay attention to detail. It helps out so much when other people aren’t doing that and you pick up stuff a little quicker so maybe your career or your skills progress a little faster than others. So it definitely helps out a lot that I’ve been in the Army and the jobs that I did.

PRO MMA NOW: Did you ever think about pursuing a career in any other sport besides MMA?

ERIC PRINDLE: I actually did a little bit of indoor arena football. It was at the same time that I started doing MMA and the coach, because I was going to so much practice and stuff, going right from MMA to football practice, basically said that I had to pick one so I picked MMA. That is more or less my true love. The football was for fun just to see if I could do it, but as far as MMA, I actually love what I’m doing now, so I made the right choice.

PRO MMA NOW: Can you talk about what it was like to win your debut with Bellator this past April?

ERIC PRINDLE: Bellator treated me really well. It’s kind of a funny story actually that I ended up fighting a friend of mine named Josh Burns. He is a great guy and a tough fighter. The first round I went out there, I had to cut 30 lbs. for the fight so I was kind of gassed out to begin with. I went out here, threw punches, did what I had to do, ended up cutting him and hurting his leg pretty bad, and the ref stopped it after the second round and said that he couldn’t continue. He couldn’t see out of his left eye. It was pretty much swollen shut and he had a really bad cut. You know safety first is the referee’s job so definitely I hope that if I am ever in that situation, I know myself, I’m not going to stop so I hope someone stops it for me if I’m hurt that bad.

PRO MMA NOW: Now you were recently announced as being a part of the upcoming Bellator heavyweight tournament. Is there any update that you can give us on that like when you might be fighting or who your opponent might be?

ERIC PRINDLE: I’m definitely excited about being in the Bellator heavyweight tournament. I can’t really speculate on the exact time [but it will probably be] somewhere between October and September. We are actually getting ready to do some TV commercials and stuff for it up in New York coming up pretty soon. As far as my opponent, I don’t want to speculate, but I’m going to be ready for whatever is coming my way. I’m going to be in the best possible shape I can, and just learn as much as I can from now until then and just go out there and have a good showing for the fans and for Bellator.

PRO MMA NOW: Can you talk about the training that you’re doing for this tournament, where you’re training, and who you’re working with?

ERIC PRINDLE: Basically right now I’m working with Josh Barnett, Erik Paulson, and a bunch of different trainers and different camps. Just basically I go around to every camp and try to just get in any training with good guys, like I’m working with Scott Peters at the Fight Ready gym. He’s really well versed on the ground. He’s a big strong dude. He has played NFL football so he’s definitely a phenomenal athlete. So I’m just trying to get better at every aspect of the game because that is the name of the game now. You can’t be strong in one position or they’ll either take you to the ground or wherever they need to take you to win. I’m just trying to get better and get to the best possible shape I can that way when it comes fight time I can give 100 percent and hopefully win.

PRO MMA NOW: What goes through your mind now when you think about the possibility of fighting Cole Konrad in the future?

ERIC PRINDLE: When I’m thinking about fighting Cole Konrad for one I’ve already trained with him at the DeathClutch camp with Brock Lesnar and all of those guys. They are all phenomenal athletes and they’re very strong at wrestling and everything with the MMA game. So basically I’m just going to, like I said before, just try to keep getting better and keep getting better knowledge, tighten my game up on the ground in wrestling, try to win every fight from now until then and just keep progressing. Cole Konrad is one phenomenal human being and athlete. He is a great guy.

PRO MMA NOW: What would be the best way for fans to stay updated on your involvement in the Bellator heavyweight tournament?

PRO MMA NOW: Is there anything else you would like to add?

ERIC PRINDLE: Basically if there are any vets out there that are having a hard time with post-traumatic stress disorder (PTSD) or anything, basically physical training helped me out a lot. When you get out of the Army you know you’re used to doing so much physical training and then when you get out and you’re hurt you don’t really feel like doing that nor do you have the structure to do it and I can tell you one thing that helped me from being messed up was I got back into MMA and the training. If you’re hurting or you’re feeling like you want to end your life just go to one of the gyms and pretty much everybody in MMA will help you out. So just go there and take it a day at a time and it will get better.