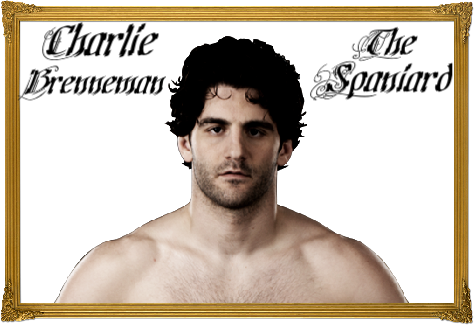 When Charlie Brenneman (14-2) stepped off the plane in Pittsburgh, Pa. on June 22 he was greeted with some disheartening news. Joe Silva had called Brenneman’s manager to tell him his opponent T.J. Grant had contracted mono and would not be able to fight that Sunday at UFC Live 4.

Brenneman, who was looking forward to competing in front of his home crowd, his friends, and his family, was now just cutting weight to collect his show money.

Then Friday afternoon Brenneman’s fortune began to change.  Word came that Nate Marquardt had not been medically cleared to fight and there was a chance that Brenneman could step in to face Rick Story (13-4) in the night’s co-main event.

The fight between Brenneman and Story became official right before the two weighed in on Saturday, and the rest as they say is history. Brenneman went on to get the biggest win of his career when he upset Story via unanimous decision.

Brenneman spoke with ProMMAnow.com‘s Josh Cross this past week about how he prepared for the fight on such short notice, what it is was like fighting in front of his home crowd, and if he thinks Story underestimated him.

“The Spaniard” also gave his thoughts on where he feels like he fits into the UFC’s welterweight division since his win, and what he thinks about the Marquardt situation.

PRO MMA NOW: What has it been like this week since your win Sunday night?

CHARLIE BRENNEMAN: It has been insane man. I really haven’t stopped moving. I haven’t put my phone down with emails and interviews. It definitely changed a lot overnight, but it’s part of the process of getting to where I want to get.

PRO MMA NOW: Can you give us a brief timeline of the events last week and how everything went down?

CHARLIE BRENNEMAN: I got out to Pittsburgh on Wednesday and basically right when we landed Joe Silva called my manager and let him know that my original opponent T.J. Grant got sick with mono, so he told me that I did not have a fight, that I didn’t have an opponent, but I still had to make weight. So I went for the next two days making weight for no reason other than collect my show money, and then Friday afternoon about 4 o’clock he told us that there was a chance I could step in for Nate Marquardt. Then finally on Saturday at weigh-ins they told me I had the fight.

PRO MMA NOW: So how do you come up with a game plan for a fight like that on such short notice?

CHARLIE BRENNEMAN: It was a basic game plan. I had a really good trainer and my brother is very intelligent in the sport as well, so the two of them and myself just came up with a basic plan and fortunately I was able to execute that plan.

PRO MMA NOW: Did Story fight the way you were expecting him to or was there anything he did that surprised you during the fight?

CHARLIE BRENNEMAN: It went pretty much as I expected.

PRO MMA NOW: There was a lot on the line for Story during this fight. He was on a six-fight win streak and was close to a title shot. Why do you think he risked it all in taking this fight? Does he just like to fight that much or do you think he underestimated you at all?

CHARLIE BRENNEMAN: I don’t think he did underestimate me. The way he is as a fighter he is like 100 percent every single fight so he may have been a little disappointed with the fact that he was not fighting Marquardt, but I definitely don’t think that he took me lightly.

PRO MMA NOW: What was going through your mind when the fight ended? Did you think you had won?

CHARLIE BRENNEMAN: I was very confident that I won the fight, at least two rounds to one round. I know judging in MMA is crazy so I wouldn’t have been shocked if it went the other way, but I without a doubt did what I needed to do to win the fight.

PRO MMA NOW: What was it like being able to fight in front of your home crowd and how big of a role do you think it played in the fight?

CHARLIE BRENNEMAN: It was the most incredible night of my life having everybody there, my family, my friends and local Pennsylvania fans. It was surreal. It helped at least some if not a lot during the fight going in-between rounds and hearing them chanting my name just knowing that I had to perform in front of my friends and family.

PRO MMA NOW: What does this win mean for you and your career?

CHARLIE BRENNEMAN: It validates me as a very good welterweight fighter in the UFC. For me personally it makes everything that I do in training well worth it and career wise it’s a giant step in the right direction. What we fight for is exposure, TV time, title fights, [and] money, so this was just a giant step in that direction.

PRO MMA NOW: So with this win where do you feel like you rank in the UFC’s welterweight division? Do you see a title shot anywhere in there soon?

CHARLIE BRENNEMAN: I think a title shot or contention shot is kind of a little bit premature, but I will say that if I can beat maybe two or three more studs then yeah, that definitely puts me right at the top of the division.

PRO MMA NOW: Now obviously part of the reason why you were able to get this fight was because Nate Marquardt wasn’t medically cleared to fight. Do you have any thoughts on that whole situation?

CHARLIE BRENNEMAN: I don’t have any real solid thoughts one way or another. What he did was unacceptable by the commission and he suffered the consequences.

PRO MMA NOW: What’s next for you? When do you think we’ll see you back in the cage?

CHARLIE BRENNEMAN: I’m taking this week off and kind of relaxing and veg out a little bit, but I’ll get back to training next week and train through the summer and just be ready if I get the call on short notice. Otherwise I’ll just wait for the call. It could be anywhere from you know a month and a half to four or five months. You never really know.

PRO MMA NOW: If someone wanted to get one of your Spaniard Beat Down shirts, is there a place where they can order one?

CHARLIE BRENNEMAN: We are in the process of contacting Sheetz and trying to formulate a plan for that, but yeah you can check my website (Charlie-Brenneman.com) or my Twitter (@SpaniardMMA) and I will post as soon as I know anything.