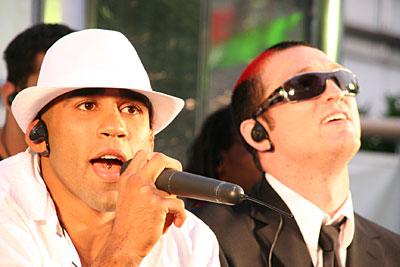 Strikeforce officials have announced a lightweight contest for their upcoming “Fedor vs. Henderson” card. Gesias “JZ” Cavalcante will meet Lyle Beerbohm at the event, which takes place July 30 at the Sears Centre in Hoffman Estates, Ill. outside of Chicago.

“JZ” is still looking for his first Strikeforce victory after his last fight ended in a no contest after his opponent, Justin Wilcox received a poke to the eye. In his earlier Strikeforce contest, the Brazilian fighter dropped a controversial decision to former champion Josh Thomson.

The seven-year veteran made his name and picked up his biggest wins while fighting in Japan. He went a perfect 7-0 in the now defunct K-1 Hero’s promotion defeating the likes of Vitor Ribeiro, Nam Phan and Caol Uno.

After starting his career with 15-straight victories, Beerbohm has now dropped back-to-back fights. Pat Healy handed him his first career defeat via decision at Strikeforce Challengers 14. Dream champion Shinya Aoki then bested “Fancy Pants” on the undercard of “Diaz vs. Daley.” During his winning streak, the unorthodox scrambler defeated Ribeiro, Duane Ludwig and Rafaello Oliveira.