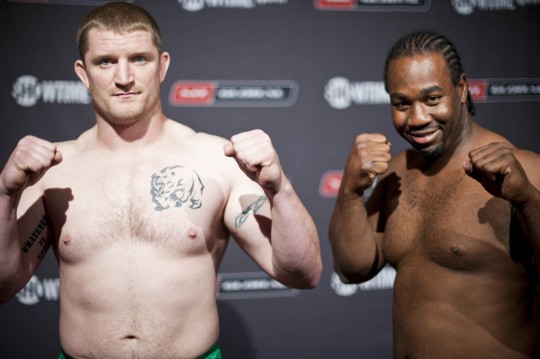 Fighters competing Friday at M-1 Challenge 26 (Bennett vs. Garner 2) at The Hangar at OC Fair & Event Center in Orange County, Calif., weighed in Thursday at Hooters in Costa Mesa.

“I want it bad. I feel lucky to get rematch and the opportunity to get this one back. He’s the type of dude that if you give him an inch, he’ll take a mile.

“I got bigger, stronger and faster since we fought. If he’s looking at our last fight then he’s in trouble because I’ve gotten a lot better since then.

“I sparred with Rampage Jackson for his fight with Lyoto Machida and he had zero takedowns against me.”

“My background is freestyle wrestling but I can adjust to my opponent.”

“I enjoy striking and boxing but I’m not scared to fight on the ground. I enjoy the clinch.”

“My MMA skills are getting more well-rounded. MMA is getting much more popular in Germany.”

“I’m my own trainer so you need to be self motivated. It can get difficult but you still have to dial in and get it done.”

“He talks a good game but I don’t think he’s been tested. And he’s never been victorious against a fighter of my caliber.”

“I haven’t lost in three years and I’ve learned a lot since then. “

Mauro Ranallo will call the action from ringside with Pat Miletich serving as analyst. For information on SHOWTIME Sports programming, including exclusive behind-the-scenes video and photo galleries, complete telecast information and more, please go to the new SHOWTIME Sports website at http://www.sho.com/sports.