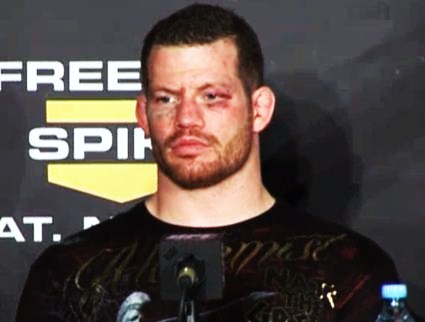 Nate Marquardt (31-10-2) was scheduled to headline this past Sunday’s “UFC Live 4” event against Rick Story (13-4). As Joe Rogan began to announce the weigh-ins on Saturday, he first revealed there had been a change in plans, Marquardt had failed his pre-fight medicals, and would not be allowed to compete.

UFC President Dana White later confirmed the news Marquardt had failed his medicals, but also added the rather shocking news that he had subsequently been released from the UFC. He also said Marquardt needed to “man up” and explain to the fans what happened.

During today’s episode of “The MMA Hour” with Ariel Helwani, Marquardt came clean.

Nate said he had been dealing with an issue since August of last year where he began to feel weak and lethargic. After consulting with a physician, it was decided he would go on Hormone Replacement Therapy (HRT) which would help his body produce testosterone.

Marquardt said New Jersey gave him a therapeutic use exemption against Dan Miller for his bout in March. However, after the bout, the athletic commission wanted him to come off the medication for eight weeks and run their own tests to see if he in fact really needed the treatment. According to Marquardt, even the commission’s doctors felt he needed to be on HRT.

Because Marquardt had been off the medication for a total of 10-11 weeks, and his fight with Story was just three weeks away, he said his doctor wanted to give him a higher than normal dose to get him back where he needed to be. At this point the doctor gave him three separate testosterone injections.

We know what happened next. Come fight time, his testosterone levels were too high and he was not allowed to fight.

Marquardt’s management said his fighter’s testosterone levels would have been at a normal level by Sunday, had the commission tested him the morning of the fights. However, they are not blaming the commission and seem to be taking full responsibility for the matter.

As far as being released from the UFC, Marquardt said he was half expecting it, “I messed up. I was main event. All the responsibility is on me at that point.”