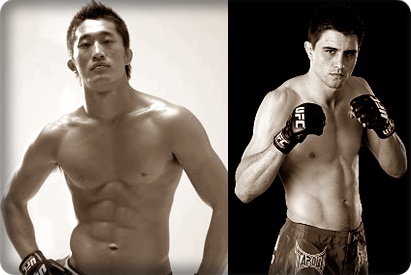 The UFC 132 event this weekend features a magnificent welterweight battle between Carlos Condit and Dong Hyun Kim with the winner moving into the top tier of the division. Kim is undefeated but Condit will be his stiffest test to date with Condit probably one or two wins away from a title shot.

Dong Hyun Kim comes into this fight with an overall record of (14-0-1 1 NC) with 6 wins via TKO/KO and 1 submission to his credit. Kim lost a controversial split decision to Karo Parisyan at UFC 94, but the bout was overturned when Parisyan tested positive for 3 banned substances. Kim was last seen in action besting Nate Diaz at UFC 125 winning a unanimous decision. Kim has an extensive background in judo and has solid wrestling to support his top game. He is also has good size and is physically strong for a welterweight, but does have cardio issues at times.

Carlos Condit comes into this fight with an overall record of (26-5) with 13 wins via submision and 12 wins via TKO/KO. Incredibly, Condit has only won one fight via decision and that was against Jake Ellenberger. Condit was last seen in action knocking out Dan Hardy at UFC 120 in October 2010. Condit has very good muay thai skills, a great ground game, and fights at a relentless pace. The one noticeable flaw in his game is his takedown defense which could play a factor in this fight.

Stylistically, I believe that Kim is a bad matchup for Condit because of his ability to take Condit down. The major questions going into this fight will be can Condit stop the takedown of Kim, and can Kim keep up with the pace that Condit pushes? I believe Kim will be able to take Condit down, but Condit is very dangerous off his back unlike most fighters.

If Condit keeps it standing I think he wins the striking battle as he has more tools at his disposal, but it’s hard to say what will happen if and when this fight goes to the ground. Condit has a pretty active guard, but will he be content with staying on his back for 2-3 minutes of a round if he’s not successful in sweeping Kim or will he look to get back up to his feet? If he’s not able to get back up to his feet or sweep Kim, then Kim probably wins the decision opposed to getting submitted by Condit.

However, Condit is great at creating scrambles and transitioning so it’s possible that he could put Kim on his back at some point in which he could definitely start to break Kim down with his relentless pace.

I think Condit will have success striking and Kim will look for the takedown and get it. However, Condit should be able to get back to his feet and/or stop some of Kim’s takedown attempts as well. I see Kim beginning to fatigue about halfway through the second round with Condit beginning to shrug off his takedown attempts. I think Condit will take Kim down at some point and impose his will, stopping Kim with strikes or finding an opportunity to submit him. If Kim comes into this fight in shape, he could definitely win a decision though.

1 thought on “UFC 132 preview: Carlos Condit looks to separate himself from the pack with win over Dong Hyun Kim”