“UFC Live 4: Kongo vs. Barry” takes place this evening at the Consol Energy Center in Pittsburgh, Penn. Following a shocking change of events on Saturday, the main event is now Cheick Kongo vs. Pat Barry.

The ProMMAnow.com staff has come together to give their predictions and thoughts on each of the main card bouts as well as a couple of the high profile prelim bouts. Read our thoughts, then we want to hear from you. Who do you agree with, disagree with and who is just plain off their rocker? 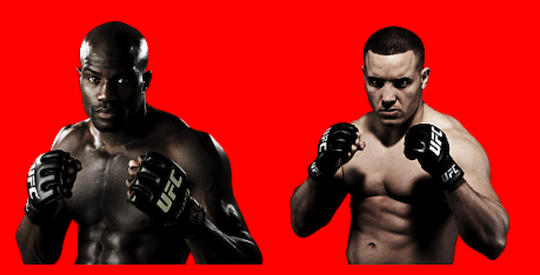 RICHARD MANN: Recent fights have made it clear that Pat Barry is the better striker. He could come out and throw some nasty leg kicks against the taller fighter and probably finish the fight. However, Kongo has shown more willingness to fight with an MMA style. He likes to come out, work in the clinch and go for takedowns. I think that, plus Kongo’s size advantage, will be the story in this fight. Kongo by decision

BRIAN FURBY: A good matchup for Barry. More explosive than Kongo, and it will be a good looking win on his record, provided Barry doesn’t get starstruck like he did with Cro Cop. Barry by TKO in Round 1.

KELVIN HUNT: I think Kongo’s wrestling will be the difference in this one, plus Kongo will have a reach advantage if they stay standing. Barry’s leg kicks will be a non-issue because it could get him taken down. I think Kongo takes Barry down and ground and pounds him out via TKO.

JACK BRATCHER: Personally, I think this is a MUCH better main event than the Marquardt fight. Nothing against Rick Story, but I’d just rather see these two heavyweight strikers mix it up in the headliner. I’m picking Barry to win. Not sure how he will end it, it might even go the distance, but I’m certain it will involve quite a few leg kicks and head kick attempts. 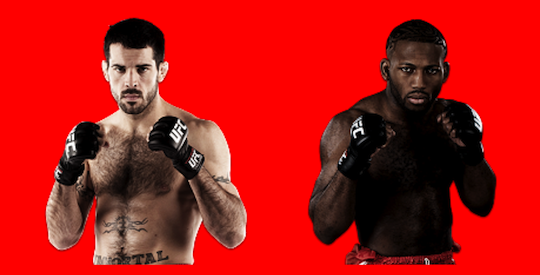 RICHARD MANN: Both of these fighters need wins. Howard should be the favorite because he has only lost two fights in a row. My only hope is that this fight does not end in a draw. Look for Howard to score on the feet and take the decision. Howard by decision

BRIAN FURBY: Time for Brown to rebound. Brown by TKO in Round 2.

JOSH CROSS: Both of these guys need this win, and while I feel like both guys could definitely take some big risks in this fight, I think they will probably end up playing it safe just so they don’t get caught. Howard is tough and I don’t see Brown finishing him during this fight. I think Howard will take the fight to the ground and control the fight from there. Pick: Howard via Decision.

KELVIN HUNT: This could be an entertaining fight if they both don’t fight to “not to lose” with their UFC livelihood on the line. I think Howard takes this one as he’s a bit more well rounded than Brown. Plus, Brown’s submission defense is pretty bad. Howard via submission.

JACK BRATCHER: Both of these guys’ jobs are on the line here. Brown has lost his last three and Howard has lost his last two. Howard is the better wrestler, he’s more athletic and he’s probably stronger. Howard should take it via decision. 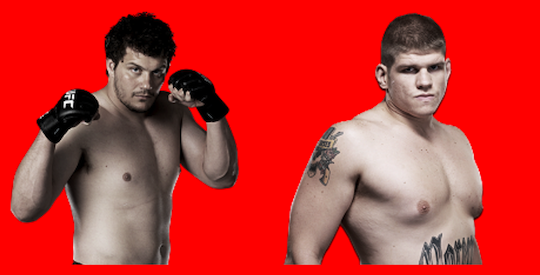 RICHARD MANN: Morecraft got pulverized by Stefan Struve, so some heavy shots from Matt Mitrione should be enough to finish this fight. I am going to use this space to vent my frustration with this Mitrione guy. He has been matched with opponents that he can beat, which is fine because he had zero fights before going on the reality show. However, no one gets that kind of treatment in the UFC. What about this guy has made the powers that be at Zuffa throw him softballs? Miirione by knockout

BRIAN FURBY: Meathead continues to move up the heavyweight ladder. Mitrione by TKO in Round 1.

JOSH CROSS: I think this is going to be the biggest test for Mitrione that he has had yet in the UFC. I think Morecraft has the best chance to win if the fight goes to the ground, but I think if it goes there Mitrione will be able to defend against a submission attempt. I think this fight won’t stay on the ground much if it goes there, and I think that the longer the fight stays standing, the more it favors Mitrione. Pick: Mitrione via TKO.

KELVIN HUNT: A lot of people are sleeping on Morecraft, but I think he’s going to give “Meat” a pretty good fight. However, I think Mitrione’s power and athleticism will get him through this one. Mitrione via TKO. 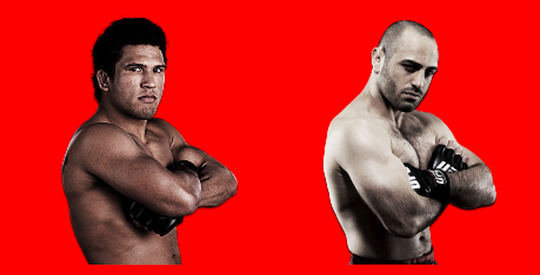 RICHARD MANN: Back when Urijah Faber was lording over the featherweight division, a lot of people thought he was pound-for-pound material. I always reminded them that the featherweight division was, and still is, incredibly weak. By all account, Manny Gamburyan was a failed lightweight before dropping down to the 145-pound division. He won his first three fights in the division including victories over two guys who were ranked in the top-ten at the time. Tyson Griffin is the better overall fighter. He has advantages on the feet and ground. Griffin by decision

BRIAN FURBY: Gamburyan is scrappy, but Griffin will grind out the win. Griffin by Unanimous Decision.

JOSH CROSS: This fight seems fairly close to me and I think that it could go either way. If Gamburyan can watch out for Griffin’s striking and take the fight to the ground, then I think Gamburyan can dominate from there, which I think will happen. Pick: Gamburyan via Decision.

KELVIN HUNT: Griffin will be the larger fighter with better striking and I doubt Gamburyan will be able to take Griffin down. Griffin via decision because he’ll fight ‘safe’.

JACK BRATCHER: It’s hard to believe Tyson Griffin has lost three fights in a row. In his nearly five years with the UFC he has won five “fight of the night” awards and one “fight of the year” award. Because this fight will be his first fight at featherweight since joining the UFC, it’s hard to say if the UFC would cut him if he were to lose this fight. However, that’s not a risk he is probably willing to take. We all know Manny has some heavy hands and he’s very strong. Tyson should have the better boxing and wrestling in this fight and be able to out-point Manny for the decision win. 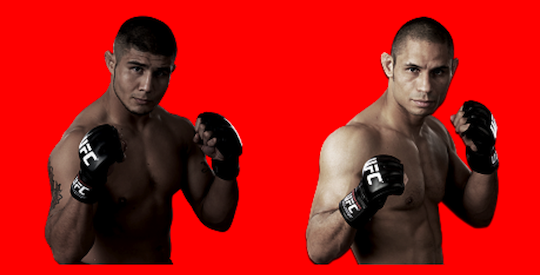 RICHARD MANN: No one needs a win on this card like Joe Stevenson, and he will be able to pick it up here (see above for difference between lightweight and featherweight divisions). Lack of reach has always hindered Stevenson, so the move to featherweight should also help in that department. He should actually have a striking advantage too. Vazquez’s only hope is to get the fight to the ground, but Stevenson has always been a capable grappler. Stevenson by decision

BRIAN FURBY: Stevenson is just going to be too much for Vazquez. Joe Daddy will likely lock on one of his crazy guillotines and it’s over. Stevenson by submission in Round 2.

JOSH CROSS: Joe Stevenson has been chosen to welcome WEC veteran Javier Vazquez into the UFC. I think we are going to see a good grappling match here, and I think that if it does come to that, Stevenson is more experienced and will be better than Vazquez on the ground. I don’t see Stevenson being able to finish Vazquez though. Pick: Stevenson via Decision.

JACK BRATCHER: Javier makes his UFC debut here after going 2-3 in the WEC. Joe Daddy has lost his last three bouts at lightweight and makes his featherweight debut here inside the UFC. Both guys are BJJ black belts and very accomplished grapplers. No one has ever finished Javier. All of his five losses have come from decision. Stevenson has multiple losses from submission and by knockout. Of course he does have 44 fights compared to Javier’s 20. That being said, I’m going with Javier here. He is more used to fighting at featherweight, I think he’s faster and hopefully we’ll see a great grappling match here. Javier by submission.