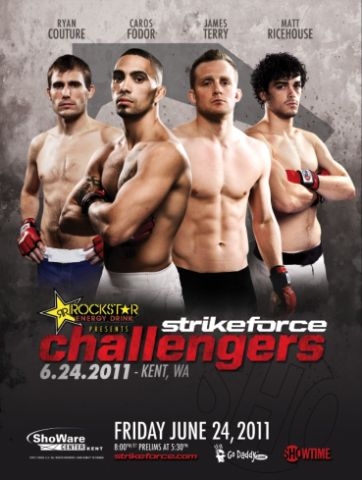 Strikeforce Challengers: Fodor vs. Terry takes place this evening at the ShoWare Center in Kent, Wash., and is headlined by a lightweight bout between rising stars Caros Fodor (10-3) vs. James Terry (10-2).

In the co-main event UFC Hall of Famer Randy Couture’s son, Ryan Couture (2-0) will take on another undefeated lightweight in Matt Ricehouse (4-0).

The Strikeforce Challengers 16 main card will air LIVE on Showtime this evening starting at 11 p.m. ET (delayed on West Coast). Join us here at ProMMAnow.com(www.prommanow.com) as we provide LIVE results and play-by-play analysis of the event.

Press F5 on your keyboard to refresh this page, as quick results and play-by-play commentary are updated LIVE in real time.

Round 1 – Budd puts de Randamie against the cage, pressing her from the clinch. Budd gets the takedown but de Randamie has Budd’s head in a guillotine. It’s not tight. Budd puts some fists in her ribs. Budd on top in half guard and pops her head out. Budd moves to full mount. De Randamie bucks up from the bottom but Budd maintains position. Budd postures up with punches. She then transitions to an armbar but de Randamie escapes and ends up on top. She lets Budd up to her feet. Budd shoots, presses her to the cage and gets a single leg takedown. De Randamie throwing strikes from the bottom. Budd inside her full guard, staying busy enough at this point but doing no damage. Budd’s left eye is black and swollen. ProMMAnow.com scores the round 10-9 for Budd.

Round 2 – Leg kick from Budd. De Randamie fires back with a one two. Budd locks her up and presses her to the cage. De Randamie throws a knee but misses. Budd goes for a takedown but de Randamie grabs the cage and prevents it. De Randamie lands some elbows to Budd’s head as she stays relentless on her takedown attempt. Budd still working for it as de Randamie continues to give her some rabbit punches. Budd finally gets a single leg takedown. De Randamie uses the cage to push off and flip over and get to her feet. From the clinch de Randamie gives her some nice knees to the body. Budd looking for the takedown again, looking like a female Clay Guida. Budd gets the takedown. De Randamie has her in a guillotine headlock, preventing Budd from doing much with top position. Budd pops her head out and is in half guard. Budd bloodied up as De Randamie punches her numerous times from the bottom. ProMMAnow.com scores the round 10-9 for Budd.

Round 3 – Now both of Budd’s eyes are black and swollen. One two from de Randamie. Budd shoots but gets pushed aside. Budd goes for a leglock and de Randamie starts drilling her with punches. Budd covers up as de Randamie throws punches. De Randamie drops down for a guillotine choke, they roll over and Budd is free from the choke. De Randamie is on top in half guard, now full guard. Up kick from Budd connects. De Randamie lands a few nice shots as she postures up. Budd gets to her knees then feet. She slams de Randamie and is on top in half guard. De Randamie has full guard now. Budd with short little punches to the body. De Randamie looks for some type of submission but not even close. Ref stands them up. Budd shoots and eats a jumping knee. Budd gets the takedown though and stays just busy enough. De Randamie never stops punching from the bottom. ProMMAnow.com scores the round 10-9 and the fight 30-27 for Julia Budd.

Round 1 – King Mo in High’s corner. Mulhern comes in swinging, delivers a knee. High with a leg kick. Big leg kick from High. Mulhern with a jab and High puts him down with a single leg. Mulhern is back up though only to get put right back down. High punches him in the body and Mulhern lands an upkick to the body. Big body kick, then head kick from High. High takes him back down and Mulhern grabs a leg, looking for a submission. High pulls out and Mulhern gets up. Right hand from Mulhern but High puts him back on the ground. Mulhern has full guard as High postures up. Mulhern grabs a leg but High pulls out. Mulhern stands up. High with a left, then a takedown. Mulhern has full guard. High stands up. Mulhern lands an upkick to the body, then stands up. High with one more takedown, a knee tap, before the bell. ProMMAnow.com scores the round 10-9 for High.

Round 2 – High puts him down early. Mulhern has full guard. High stands up and throws some big punches as he dives back into Mulhern’s guard. Mulhern trying to control High’s position. High stands up. Mulhern grabs a leg. High gets out, Mulhern gets up and comes after him swinging. High ducks under, picks him up for a big slam. Mulhern eats a left, then stands up. Body kick from Mulhern, High catches it and puts him right back down. Mulhern uses a body triangle to hold High inside his guard. Mulhern lets it go. High stands and dives with a punch. Mulhern with the body triangle again. One minute to go in the round. Nice left hand from High. They stand up. One two from High. Mulhern with a crane kick and ends right back down on his back. High stands up and dives in with a punch. Mulhern with a couple elbows off his back. ProMMAnow.com scores the round 10-9 for High. I think he’s had about 15 takedowns so far.

Round 3 – Uppercut from Mulhern but gets put right back on his back. He pulls mission control, lets it go as High has half guard. Mulhern regains full guard. High postures up. Mulhern attacking from bottom with up kicks. High lets Mulhern up, lands some punches then puts Mulhern right back down. Mulhern lands some elbows off his back. High stands up and the ref lets Mulhern up. High shoots immediately and puts Mulhern down. High goes for a D’arce choke and Mulhern escapes. High inside his guard now. Mulhern gets to his knees then feet and has High’s leg. High pulls out, scrambles, and ends back inside Mulhern’s open guard. Mulhern eventually gets to his feet but High immediately slams him face first into the mat. High ends the round on top in half guard. ProMMAnow.com scores the round 10-9 and the fight 30-27 for Jason High.

Round 1 – Leg kick from Villante. Push kick, leg kick. Larkin circling. One minute in and Larkin has not thrown a shot. Villante shoots, picks Larkin up high and slams him. Villante on top in half gaurd. Vilannte with an elbow. Villante trying to pass guard but Larkin doing a good job controlling. Villante with some nice elbows. Larkin recovers full guard. Larkin pulls mission control. Villante with some small shots to the body, one to the head. ProMMAnow.com scores the round 10-9 for Villante.

COMMENTS: I think Larkin could have finished him had he poured it on more. It sort of fell into a sparring match in the third round. Still a pretty good showing from Larkin. Villante just slowed down tremendously after round one. Maybe he got hurt with some of those leg kicks.

COMMENTS: So will Couture keep fighting? He’s never seemed terribly committed to MMA as a career.

Round 1 – Fodor stalking. Terry turns him to the cage then backs out. Fodor chases him to the other side of the cage, the tie up and Terry turns him to the cage. They exchange shots and tie back up against the cage. Fodor with a knee to the gut. They exchange knees. Fodor with a knee to the body and Terry trying to get enough distance to strike but Fodor won’t give him the distance and continues to chase. Fodor with a knee. They tie up. Terry pushing him to the cage. Terry backs out Fodor chases, tags him hard and Terry’s face bleeding now as Terry lands another combo. They tie up briefly, exchange punches, Terry turns him into the cage, backs out. Left hand from Fodor. Right, left from Fodor. Knee from Terry as he grabs a collar tie. He tries to back out but Fodor stays on him. Knee from Terry as they tie up again. Terry backs out. Overhand right from Fodor. Terry misses an uppercut, Fodor ducks under for the shot. Terry stuffs it, picks him up and drops him on his head. Terry stands over him and Fodor kicks him in the body. ProMMAnow.com scores the round 10-9 for Fodor.

Round 2 – Terry’s coach Cung Le gives him some advice to step to the side and counter. Fodor already chasing him down. They tie up, Terry drops levels against the cage.Fodor defending the takedown. Terry picks him up and puts Fodor on his back. Terry on top in half guard. Terry looking for the arm triangle. Fodor with his feet on the cage. Terry tries to mount but Fodor pushes him off and gets up. Fodor with a left as he stalks. They tie up, Terry with underhooks. Knee from Fodor to the body. Terry backs out. Fodor grabs a collar tie and lands a knee. Terry with a knee. Fodor lands a knee to the face. Left hand from Fodor, another knee scores. One minute to go. Knee from Fodor, again. Clinched against the cage. Terry drops levels. Fodor with a knee. ProMMAnow.com scores the round 10-9 for Fodor.

Round 3 – They exchange punches and Fodor gets the best of it. Fodor walking him down, landing some nice shots. Terry fires back, gets underhooks and puts Fodor against the cage. Terry backs out. One two from Terry. Left jab from Fodor. Terry with a right. Fodor with a low knee and time is called. Leg kick from Terry. Terry shoots, stuffed. Short uppercuts from the clinch from Fodor. Terry backing up, swinging and missing. Fodor with a leg kick. Again. Terry with a double jab, shoots, but stuffed. Clinch. Knees from both. One and half minutes left in the fight. Tied up against the cage, battling for position. Fodor drops down for a guillotine but does not have guard and Terry gets out. Terry on top in half guard and throws some light punches at the end of the round. ProMMAnow.com scores the round 10-9 for Fodor and the fight 30-27 for Fodor.