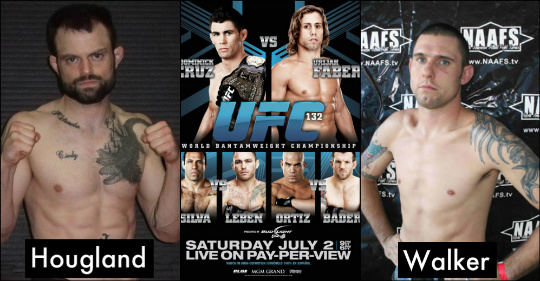 Following an injury to Cub Swanson, his featherweight bout with Erik Koch was removed from UFC 132, scheduled for July 2 at MGM Grand Garden Arena in Las Vegas, Nev.

In their place, a bantamweight bout between UFC newcomers Jeff “Hellbound” Hougland and Donny “Eagle Eye” Walker has been added. UFC President Dana White confirmed the match-up on Thursday.

Hougland (9-4) is a 32-year-old submission specialist fighting out of Combat Sport and Fitness in Washington. He is currently on an eight fight win streak and has not lost since 2003. Seven of his nine wins have come via submission.

Walker (14-6), 31, trains out of GriffonRawl MMA Academy in Mentor, Ohio, alongside other pros such as UFC veteran Jason Dent. Walker has won his last seven fights, with only two going the distance.

Walker commented on being added to the card via Twitter (@EagleEyeMMA) this afternoon:

“All good things come to those who wait. I fight for @ufc next weekend. Great card in first place and im honored to finally fight for them.”

UFC 132 will air LIVE on Pay-Per-View on Saturday, July 2, and feature a bantamweight title fight between 135-pound champ Dominick Cruz and Urijah Faber. Refer to ProMMAnow.com’s Upcoming Events page for the full line-up.