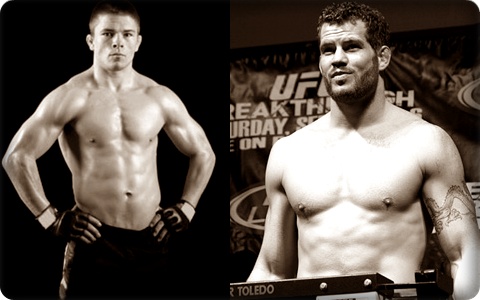 The UFC Live 4 main event of welterweight’s Rick Story and Nate Marquardt is a pretty big fight in the grand scheme of things. Marquardt is making his welterweight debut after fighting as a top 5 middleweight the past few years, and Story is looking for his win in a month after beating up top 5 welterweight Thiago Silva. Story would possibly get a title shot with a dominant win, and a win for Marquardt would certainly fast track him towards a welterweight title shot.

Marquardt comes into this fight with an overall record of (31-10-2) with 15 wins via submission and 8 wins via TKO/KO. Marquardt won his last outing against the always tough Dan Miller, but had dropped two of his last three prior to that against top 3 middleweights Okami and Sonnen. Marquardt was a huge middleweight with decent striking who is also well versed in submissions. Marquardt’s stamina will be a question coming into this fight due to the massive cut in weight as well as his takedown defense.

Story comes into this fight with an overall record of (13-3) with 3 wins via TKO/KO and 2 wins via submission. Story has won 6 fights in a row since losing his UFC debut 2 years ago, including the upset over Thiago Alves. Story is a fighter with a solid wrestling background and underrated striking skills. However, Story’s best attributes are his granite chin and ability to pressure his opponents. There could be a possibility that Story taking this fight on such short notice could be a negative if he has any lingering injuries from the Alves fight or any nagging injuries from training camp.

The key to this fight will be Story’s ability to apply pressure to Marquardt and how Marquardt will react. If Story is able to attach himself to Marquardt and fight at a high pace similar to the way he beat Alves he has a great shot at winning this. He’ll have an even better shot at winning if he can put Marquardt on his back and I think that’s what he’ll try to do. He’ll follow a gameplan similar to what Chael Sonnen and Yushin Okami used to beat Marquardt. In regards to striking, I think Thiago Alves is a much more dangerous guy on the feet and Story handed him just fine for the most part.

If Marquardt is to win he’ll need to be in great shape and he’ll need to be able to stay off his back while creating separation from Story when he tries to clinch. Marquardt’s striking needs to be much more active than in the past and Marquardt will get lazy and look to land that one big shot a lot of times.

I see Story coming out really aggressive applying the pressure to Marquardt right off the bat in hope of using a high pace and the massive weight cut to drain Marquardt after a round and a half. From there I think Story will be able to take Marquardt down by using the cage similar to the way he did against Alves and work some ground and pound. While Marquardt is well versed in submissions, he’s not really a huge threat to submit people off his back

I’m taking Story by unanimous decision or TKO stoppage in round 3.