Jon Jones excited to take some of “Rampage’s” glory *VIDEO* 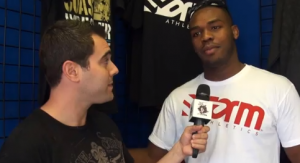 Jones is expected to defend his title for the first time later this year against “Rampage”. No date has officially been announced for the fight, although there are rumors the bout could headline UFC 135 on Sept. 24.

Concerning his upcoming bout with “Rampage”, Jones said, “When you are a young guy and beat a guy who has accomplished so much, you almost take some of his glory with you. And I’m excited for that opportunity.”