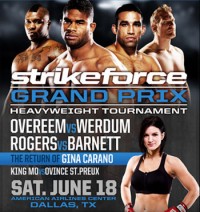 Strikeforce CEO Scott Coker was also on the call, and made the announcement Gina Carano was pulled from the card after failing her pre-fight medicals.

Overeem and Werdum will headline the Showtime televised card which will take place at the American Airlines Center in Dallas, Texas. Josh Barnett and Brett Rogers will also face each other on the card as part of the Strikeforce heavyweight tournament’s quarterfinal round.