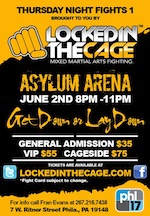 Philadelphia, PA – Locked in the Cage (www.LockedInTheCage.com), one of the leading independent fight promotions on the East Coast, is set to kick off its brand new Thursday night summer fight series on Thursday, June 2 from the legendary Asylum Arena (formerly known as the ECW Arena) located at 7 West Ritner Street in South Philadelphia.

Featured on the show will be a double main event featuring Brazilian Jiu Jitsu black belt Daniel Tavares vs. Joshua Key and Daddis Fight Camps bantamweight and the pride of South Philadelphia Jeff Cressman as he takes on Westwood Donnally.

Locked in the Cage Promoter and professional fighter Fran Evans is excited to be bringing live MMA action during the summer to the enthusiastic Tri-State fight audience.

“I was determined to give the city of Philadelphia a night of great fights on an alternative day of the week,” said Evans. “When I booked this date I knew that I would do what needed to be done for a great show and it all panned out and I have to thank the fighters, coaches, and mangers.”

Guzman, a renowned Golden Gloves boxing competitor, made his amateur MMA debut in April a week following his 18th birthday. Pegged for greatness by man local pundits, Guzman required just one minute and 55 seconds to defeat his opponent by Omo Plata submission. The talented prodigy will look to improve his record to 2-0 when he faces Dustin Hurtgam.

Rounding out the pro card will be Chris Lutz vs. Evan Velez with fighters from the area’s top gyms such as Balance Studios (Joe Wigfield) and the Fight Firm (Kevin Wong) comprising the remainder of the amateur undercard.

Tickets are on-sale via LockedInTheCage.com and will be available at the door with General Admission tickets priced at just $35. VIP tickets remain on sale for only $55 with Cageside seats available for $75.

In addition to its June 2 date, Locked in the Cage’s Thursday night Summer Fight Series will continue on July 15 and August 14.