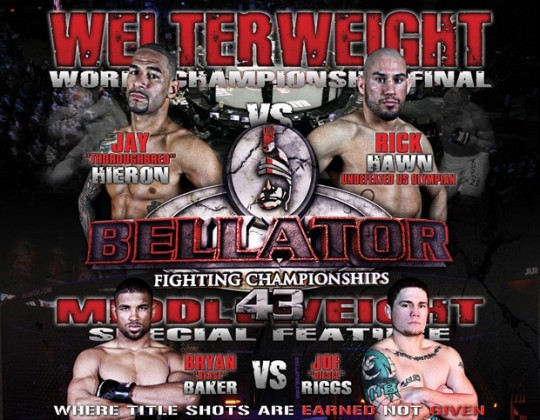 NEWKIRK, Okla. — Bellator 43 takes place this evening at the First Council Casino this evening and features the fourth-season welterweight tournament final between Jay Hieron and Rick Hawn in the main event.

Bellator 43 will air LIVE on MTV2 starting at 8 p.m. ET/5 p.m. PT. ProMMAnow.com will provide LIVE results and play-by-play commentary of each bout. Readers can press F5 on your keyboard to refresh this page, as play-by-play is updated in real time.

Round 1 – Leg kick from Vega, left jab. Leg kick from Vega. Big leg kick from Vega. Left hook. Clinch, Beebe goes for a standing guillotine, Vega trips him to the ground and gets out. Scramble to the feet and Beebe locks on a standing guillotine again, lets it go, clinched against the cage, they separate and square up. Leg kick from Vega. Dirty boxing from both, they separate and square up. Nice right from Beebe. One, two from Beebe. Clinch, Beebe drops levels, gets the takedown. Beebe on top in half guard. Vega sits up and gets to his feet. Vega pushing Beebe against the cage looking for the single. Beebe holding on to his neck, locks on the guillotine as Vega takes him down and it’s all over Vega taps out while caught in half guard. Clay Guida is in Beebe’s corner and comes in to celebrate with Beebe. Beebe does a front flip and backflip in the cage. — This was a season five bantamweight qualifier.

Round 1 – Body kick from Baker. Baker with another kick, blocked by Riggs. Baker fakes another kick. One two punch from Riggs mostly blocked. Boos from the crowd, getting restless. Baker lands a right to the groin as Riggs counters with a right hook. Riggs takes only about 20 seconds of the time out. Body kick from Baker. Baker misses a head kick, again. Riggs misses with a big right. Leg kick from Baker. Right hand from Riggs. Flying knee from Baker scores and Riggs tries to counter with a right. Baker tries to walk down Riggs, gets caught with a big right hook. Again. Head kick from Baker is blocked, still knocks him back a bit. Body shot from Baker. Slips another punch. Tie clinch from Baker, knee to the body. Flying knee from Baker does not connect as Riggs tries to counter. ProMMAnow.com scores the round 10-9 for Riggs.

Round 2 – Riggs catches a kick, lets it go. Left hand from Riggs. Nice right hook from Riggs. Nice right from Riggs as Baker tries to walk him down. Leg kick from Baker. Left hand from Riggs. Flying knee from Baker, misses, counter right from Riggs. Tie clinch from Baker, lands some knees to the body. Knee from Riggs. Baker shoots, stuffed. Another two knees to the body from Baker. Riggs fires back with big punches. Baker lands a big left to the body, Riggs counters with a right, but leaves his right low and Baker lands a huge left hook on the chin and Riggs goes down and out. He stands over Riggs and waits to see if he needs to follow up — there’s no need as Riggs covers up and the ref steps in. Big action and big power from Baker. Riggs actually looked good, he just made one mistake leaving himself open during that exchange.

NOTES: This win is even more impressive when you consider Baker is a leukemia survivor and his medicine costs $5K per month to stay healthy. His leukemia has gone into remission. Baker just proposed to his girlfriend Megan Vargas in the cage — got down on one knee and gave her a ring. She said yes. Baker’s mom is ringside clapping and smiling.

NOTES: Bellator commentator Jimmy Smith actually thought Hawn won due to him being more aggressive coming forward. I disagree because, although  yes he was coming forward, he did not score effectively which is most important. Hieron said, “Askren shine up my belt I’m coming for it.”