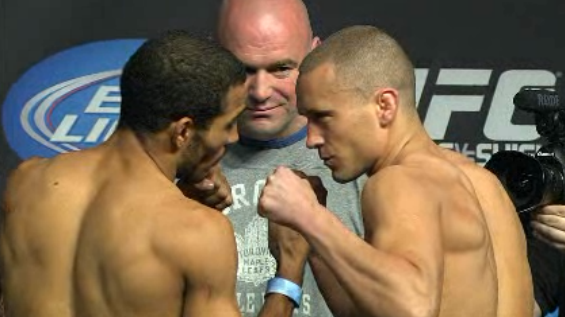 One of the things that stood out to me more than anything at UFC 129 was Jose Aldo’s ability to slip Mark Hominick’s punches. Make no mistake, Hominick landed his fair share of headshots, but Aldo’s ability to make him miss was a thing of beauty that he executed consistently while the fight was on the feet the entire fight. Let’s take a look:

This is footage from the 2nd and 3rd rounds. In the second round clip(just look at the time icon), you can see Aldo slip a straight right and then duck under a left hook but then eat a jab. In the third round footage, you can see Aldo slip a double jab and then a right hand. In the following clip he slips the same combo that Hominick threw in the second round clip. I don’t have the footage, but the most impressive thing is that Aldo is slipping the punches and still able to counter because he’s in range. Hominick threw 125 punches to the head of Aldo landing 38 for a 30% connect rate(this stat is from strikes thrown on the feet) via fightmetric.

I could only hear bits and pieces of the commentary while this fight was taking place because I was at a sports bar. However, I felt that not enough credit was being given to Aldo’s ability to slip the punches of Hominick. I remember watching the fight just in awe of Aldo slipping punches only to hear Joe Rogan talk about how Hominick was winning the exchanges.

I’ve watched a lot of MMA in my lifetime and this is the first time I’ve seen a fighter consistently slip punches the way Aldo did, not to mention this was against a guy that’s as quick and technical as Hominick. We’ve seen Anderson Silva slip punches before, namely against Forrest Griffin as you can see below:

Granted, these guys are not sitting in the pocket like Aldo and Hominick, but see how Silva just leans back to avoid the left hook from Griffin? The beauty of Aldo’s technique is that he has very little wasted motion and is in position to counter if he wanted to against Hominick. I have zero .gif ability so if any of our readers can make .gifs with Aldo slipping the punches of Hominick and countering, that would be great.