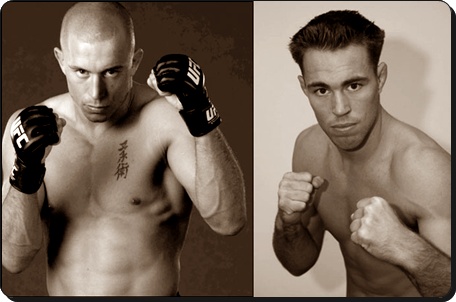 The fifth and final preview for UFC 129 show this weekend is the main event in which Georges St-Pierre will defend his title against challenger Jake Shields. This is the fight that has been pushing this event and I can only imagine what it’ll be like right before it’s time for this fight to begin!

Jake Shields comes into this fight with a career record of (26-4) with 10 wins via submission and 3 via TKO/KO. Shields has beaten the best of the best outside of the UFC and won a controversial decision in his UFC debut against the always tough Martin Kampmann. Shields is a grappling ace with good wrestling skills, but his standup is servicable at best. He’s durable and is a sizeable welterweight that is absolutely relentless at times.

Georges St-Pierre comes into this fight with a career record of ( 21-2) with 8 wins via TKO/KO and 5 wins via submission. St-Pierre is arguably the best mixed martial artist on the planet and has beaten all of the best welterweights in the world except for Shields. St-Pierre has won 8 fights in a row and avenged both of his losses. GSP brings solid striking, the best wrestling in MMA, and dictates where he wants the fight to take place.

The UFC and GSP has really tried to push the idea that Jake Shields is a legitimate threat to challenge for his title. This fight is really similar to the Anderson Silva vs. Demian Maia fight that took place last year in my book. Shields only has one realistic way to win this fight and that’s via submission. Now, if this were a straight grappling match then I think you’d be safe in saying that Shields would have the advantage in jiu-jitsu. However, it’s a different ballgame when GSP is in your halfguard reigning down elbows.

I think Shields will find it difficult to get GSP to the ground if at all, much less keep him there to work his jiu-jitsu from the top position. Let’s be honest, all the guys that Shields has subbed in the past few years all have suspect submission defense. Shields may just have to pull guard to get the fight to the ground if GSP decides he wants the fight on the feet. The odds of Shields being successful from his back are really low. How many times did Shields have Jason Miller, Dan Henderson, and Martin Kampmann in positions to finish the fight and never really come close?

Shields is really durable and tough as he’s only been finished once in his career(in his 3rd pro fight). So I basically see GSP treating Shields like he did Jon Fitch in their match-up, punishing Shields on the feet for 5 rounds to win a unanimous decision.

1 thought on “UFC 129 preview: Why Georges St-Pierre will retain his title against Jake Shields”