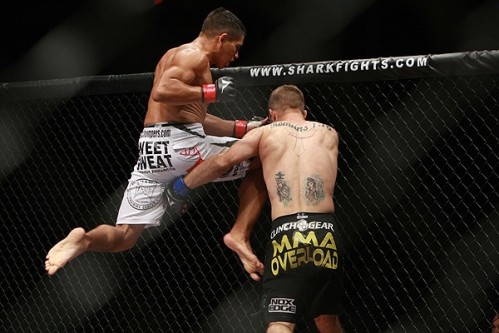 Bellator 42 takes place Saturday night at the Lucky Star Casino in Concho, Okla. The main card airs live on MTV2. My level of excitement dropped down a few pegs when the news broke that Cole Konrad vs. Paul Buentello was moved off this card. However, after looking it over, Bellator 42 is still rather solid. The card features the semifinals of the light heavyweight tournament and the promotional debuts of two top prospects.

Bellator Light Heavyweight Tournament Semifinal
Richard Hale vs. DJ Linderman
Linderman really shocked me in the first round of this tournament. I thought Raphael Davis would have very little trouble getting takedowns and controlling the fight, but I was wrong. After seeing Hale on MTV2, I can safely say that he is significantly larger than I thought he was. I think his reach will give Linderman trouble in this fight. If they do clinch up, I expected Hale to be able to score at will with knees and move onto the final.
Pick = Richard Hale
Film Study: Richard Hale vs. Nik Fekete

Bellator Light Heavyweight Tournament Semifinal
Tim Carpenter vs. Christian M’Pumbu
In the first round of the tournament, Carpenter really took advantage of the fact that Daniel Gracie is not really a professional MMA fighter anymore. He will not be able to land those same punches against M’Pumbu. Carpenter will have an advantage on the ground, but he has never been a takedown machine. Look for M’Pumbu to survive on the ground and score with big shots on the feet.
Pick = Christian M’Pumbu
Film Study: Tim Carpenter vs. Brandon Vera (grappling style)

Ronnie Mann vs. Josh Arocho
Mann really opened my eyes when he scored a unanimous-decision victory over Shigeki Osawa. Going into their fight at Sengoku 11, I thought Osawa could dominate with his wrestling and physicality. However, Mann was able to out-grapple his opponent on the ground and score on the feet. Arocho does not even have a winning record, so Mann will most likely win easily. Bjorn Rebney and company certainly have me excited for the next featherweight tournament, which will feature Mann and former SRC champion Marlon Sandro. (Mann Talk is in no way related to Ronnie Mann, that is, until he become popular enough to name drop in bars. When that happens, we will magically become cousins or even brothers.)
Pick = Ronnie Mann
Film Study: Ronnie Mann vs. Douglas Evans

Luiz “Betao” Nogueira vs. Jerod Spoon
Bellator has done a great job grabbing up a lot of the top prospects coming out of Brazil. By now, everyone is familiar with the Pitbull Brothers, and they have also signed Nogueira and Eduardo Dantas. Nogueira is a student of Marcio “Cromado” Barbosa, who is best remember for popularizing the figure-four guillotine choke. With his Luta Livre background, Nogueira should be able to pick up a win here with a leg lock. Spoon has shown flashes early in his career, but a lot of young fighters from the U.S. struggle with leg locks.
Pick = Luiz Nogueira
Film Study: Luiz Nogueira vs. Atila Lourenco