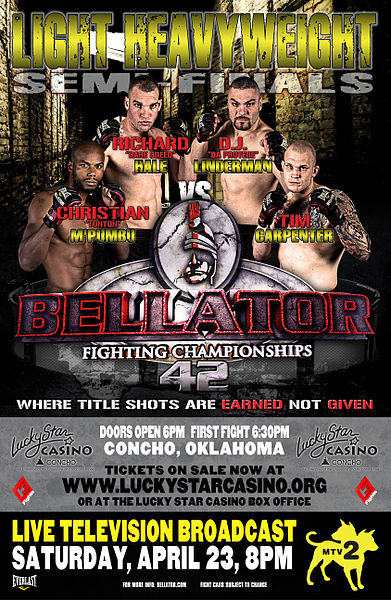 CONCHO, Okla.— The fighter weigh-ins for Bellator 42 took place this afternoon at the Lucky Star Casino in Concho, Okla., the same location that will host Saturday night’s light heavyweight tournament semifinals which will air LIVE on MTV2 starting at 9 p.m. ET/8 p.m. CT.

Two fighters on the card did not make weight. Josh Arocho, who is scheduled to fight Ronnie Mann on the televised main card in a featherweight feature fight came in at 147.4 pounds, 1.4 pounds over the non-title fight limit.

In one of the non-televised local feature fights, Chris Bell came in at 190.6 pounds, 4.6 pounds over the middleweight non-title fight limit.

Both Bell and Arocho were given two extra hours to try and make weight.

All other fighters made weight without issue. Christian M’Pumbu came in light at 201.4 pounds, a full 4.6 pounds under the light heavyweight non-title fight limit. M’Pumbu will face Tim Carpenter, who weighed in right at 205 pounds, in one of the two tournament bouts on the card.

The official Bellator 42 weigh-in results are as follows: