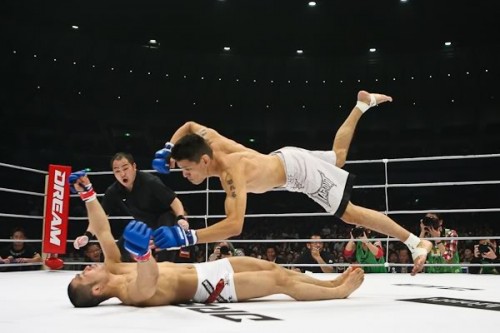 MMAJunkie has reported that former WEC champion Cole Escovedo will make his UFC debut against Renan Barao at UFC 130. The event takes place May 28 at the MGM Grand Garden Arena in Las Vegas.

Originally Barao was set to face Demetrious Johnson. However, an injury to Brad Pickett caused a reshuffling of the schedule. Johnson will now face Miguel Torres. The UFC signed Escovedo to fill the gap.

Escovedo defeated Philip Perez to win the WEC featherweight title all the way back at WEC 5. He defended the belt once before dropping it to Urijah Faber at WEC 19. In 2009, he returned from a serious infection and picked up a TKO victory over top-prospect Michael McDonald. Since his return, he is 6-2 with victories over Jeff Bedard and Yoshiro Maeda.

Barao made his UFC debut after building a 23-1 record on the Brazilian scene. He lost his first fight and then reeled off 23-straight wins. So far in the UFC, he is 2-0 with submission victories over Anthony Leone and Chris Cariaso.

UFC 130 will feature a lightweight title fight between champion Frankie Edgar and Gray Maynard. The two fighters drew with the belt on the line at UFC 125. Maynard handed Fisher his only defeated back in 2008.