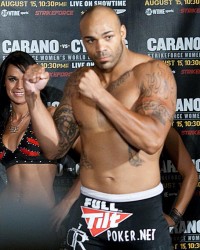 During today’s AFTERNOON PRESS BOX program, Darren and the boys talked with Strikeforce fighter Mike Kyle (18-8-1, 1 NC), who was scheduled to fight Gegard Mousasi on April 9 but was forced to withdraw due to re-breaking the same hand he had fractured in his previous fight against Antonio “Bigfoot” Silva.

Kyle discussed how his recovery is coming along as well as his reasons for wanting to drop to light heavyweight. He also expressed interest in still fighting Mousasi and doubts Mousasi has ever really felt the kind of heavyweight punching power he possesses.

In addition to talking with Kyle, the guys also discussed “The Ultimate Fighter: Team Lesnar vs. Team dos Santos” and the possibility of Chael Sonnen and Michael Bisping serving as coaches for next season. All this and much more!

AFTERNOON PRESS BOX features an MMA hour which airs LIVE each Wednesday afternoon from 2 p.m. – 3 p.m. CT on Nashville Sports Radio on 560 WNSR AM which can be heard in the Nashville and Middle Tennessee market or online on the WNSR website at WWW.WNSR.COM. It is one of the very few mixed martial arts shows you can listen to on traditional radio.