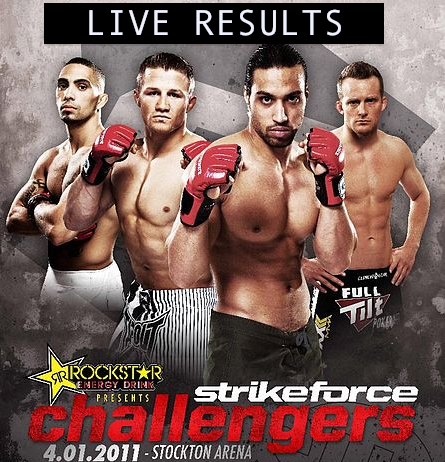 STOCKTON, Calif. — Strikefoce Challengers 15 takes place this evening at Stockton Arena in Stockton, Calif., and features a lightweight showdown between Justin Wilcox (10-3) and Rodrigo Damm (9-4) in the main event.

The event, which will air LIVE on Showtime starting at 11 p.m. ET/PT (delayed on West Coast), will be Strikeforce’s first under the Zuffa banner.

Stay close to ProMMAnow.com as we provide LIVE results and play-by-play commentary throughout the evening. Also, while waiting for the fights to start, be sure to check out Mann Talk: Strikeforce Challengers 15 predictions.

Round 1 – Douglas gets the takedown and is on top in half guard. Phillips hanging on and throws his legs up. They scramble and Douglas locks on a rear naked choke. His arm is on top of the chin though and Phillips gets out of it, looking for a standing kimura and gets free. They square up. Swing and miss by both. Body shots from Douglas, clinch, Douglas drops levels, gets a takedown but Phillips gets to his knees and Douglas takes his back  with hooks in. Phillips gets up. Head kick from Phillips blocked. Left hook and right hand from Douglas. Counter right by Phillips scores. Douglas throws a combo and scores. Phillips fires back. Douglas with his hands down looks tired. They exchange shots and Phillips clinches up and gets the takedown. He’s in half guard, moves to side, then takes Douglas’ back and locks in the choke but he is saved by the bell. ProMMAnow.com scores the round 10-9 for Phillips.

Round 2 – They swing, again, again, nothing landing solid. Again. One, two, shoot, from Phillips but Douglas locks on a guillotine as they go down. Phillips pulls his head out, postures up, lays down in half guard, trying to advance position. Phillips is in a good position for elbows which can be used now in Strikeforce. None thrown yet though. Inn fact, Phillips not throwing anything. Douglas looking for a kimura, lets it go. Ref stands them up thank goodness. One, two, three from Phillips scores, then a knee that misses. Phillips with a right. Douglas with a couple body shots. Douglas scores with a left and Phillips lands a knee to the body. Uppercut from Douglas. Phillips slowing down now too. Nice left to the chin from Phillips. Another shot from Phillips knocks Douglas’ mouthpiece out. ProMMAnow.com scores the round 10-9 for Phillips.

Round 3 – Nick Diaz is in Douglas’ corner giving instruction. Body shot from Douglas. Right hand from Douglas and Phillips lands a right, left. Phillips’ shot is stuffed and Douglas lands another punch. One, two, head kick from Phillips is blocked. Douglas with a couple big rights but they don’t land solid. Head kick from Phillips, slow, misses. Phillips walking Douglas down. Douglas fires off with a one, two, three combo. Lands a nice right. Lands another good shot to the body. Another body shot, another. Douglas counters again with big punches. His punches have more power than Phillips right now. Another right to the body from Douglas. Nice left from Douglas. Douglas has caught somewhat of a second wind whereas Phillips looks slow. Right counter from Douglas as Phillips still moving forward. Phillips swings and misses. Douglas scores with another one, two. Right hand from Phillips. Douglas should have pushed the pressure because he likely needed to finish Phillips. ProMMAnow.com scores the round for Douglas but Phillips gets the fight 29-28 as ProMMAnow.com sees it.

NOTES: The crowd is unhappy with the decision. Douglas with a mean scowl said he was the aggressor and deserved the win.

Round 1 – Douglas with a right, clinch. Fodor pushes him against the cage. They struggle, Douglas starts swinging, lands some body shots, knees. Fodor lands a knee to the body and Douglas ends up on top on the ground, takes Fodor’s back. Fodor comes out the back door. They get to their feet. Knees to the body from Fodor. Clinched and wrestling. Knees to the body from both guys. Douglas drops levels but Fodor defends. Douglas gets the takedown but Fodor gets up. Douglas shoots again but ends up on his back. Fodor in half guard. Body shots and punches and elbows from Fodor from half guard. Fodor postures up lands a big punch. Douglas tries to hang on and not doing much. Fodor going for a kimura from side control. Douglas holds onto his own shorts and that saves him from the kimura so far. ProMMAnow.com scores the round 10-9 for Fodor.

Round 2 – Side kick to the body from Douglas. Fodor puts Douglas on his back. Douglas gives up his back. Fodor doesn’t take it, they stand up, clinched. Knee to the body from Fodor. Douglas shoots and Fodor locks on a guillotine. They roll and Fodor gets full mount. Elbow from Fodor and punches. Fodor dropping a flurry of punches. Douglas rolls to his side. Fodor with body shots. Douglas hangs on. Ref calls for action. Douglas throws up his legs and Fodor moves to side control, working for a kimura, lets it go and lands more elbows. Douglas regains half guard with less than a minute to go. Boos from the crowd as the pace has slowed. ProMMAnow.com scores the round 10-9 for Fodor.

Round 3 – They exchange punches. Nice left from Fodor, they clinch, knees to the body from Fodor. More knees from Fodor to the thighs and body. Knee to the face, another from Fodor. Douglas hangs onto a wrist but he’s eating knee after knee to the body. Fodor landing several uppercuts and body shots. The ref has seen enough and steps in.

Round 1 – They are both ready to go. A little delay here as the ref says he’s waiting for the doctor to get in place.  Crowd getting restless… “It’s teetering on the border of unprofessional,” says the Fight Professor. here they go. Wilcox misses a head kick. And misses an overhand right. Left jab from Damm. Wilcox misses a head kick and lands on his butt. Damm with a hughe leg kick. Wilcox rocks Damm with a head kick. Damm shoots, stuffed. Wilcox lands a right as Damm gets up. Left hand and body kick and leg kick from Damm. Wilcox hunting for Damm’s head. Damm is in retreat mode and Wilcox is all over him. Damm keeps circling into the power side of Wilcox. Another head kick and a right hand drops Damm. Wilcox follows him down, Damm shoots and Whilcox fends him off, Damm’s face is a bloody mess. Wilcox pins him against the fence, he’s turtled up eating shots. Knee to the body of Damm, punches to the head and chin to the turtled up Damm. Damm tries to roll and Wilcox dives at him with a punch. Wilcox attacks as Damm hangs on off his back. Big round for Wilcox, ProMMAnow scores it 10-9 for Wilcox.

The fight has been stopped via doctor stoppage. The elbows from Wilcox cut Damm up. Looking at him though I don’t see any enormous cuts they would justify a stoppage but maybe there’s something I can’t see. Wilcox’s AKA teammates and coach Camarillo congratulate him.