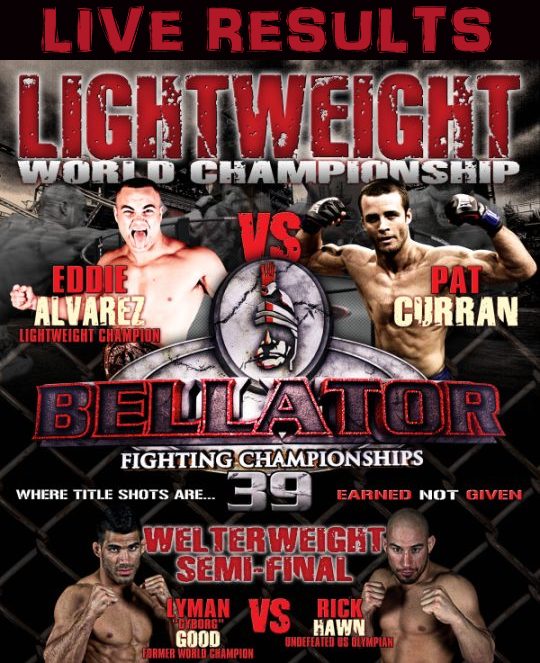 UNCASVILLE, Conn. — Bellator 39 takes place this evening at the Mohegan Sun Arena in Uncasville, Conn. The event will broadcast LIVE on MTV2 at 9 p.m. ET/8 p.m. CT, and features a lightweight title fight with champion Eddie Alvarez making his first title defense against Pat Curran in the main event.

Round 2 – Saunders with a front kick, big straight left, misses with a head kick, Lee blocks another head kick. Lee fires back. Leg kick from Saunders, body shot from Lee. Right hand from Saunders. Straight left. Knee exchanges and Lee’s face is a bloody mess. Lee knees Ben in the groin and time out is called. Lee’s nose is all busted up. Lee catches a kick but Saunders gets free, they go to exchanging, clinch, knees from the clinch from Saunders. Lee goes for a single leg. Saunders gets free. Right hand from Lee and a leg kick, Lee pouring on the pressure but Saunders fires back with a knee. Clinch. Lee grabs a leg but lets it go. Big elbow and knees to the face from Saunders, knee to the body and another elbow. Lee grabs another leg, lets it go. Uppercut from Lee but he pays for it with a big punch, knee to the face. Lee’s face is horribly busted up. Clinch war, right hand from Lee. Clinch. Elbow from Saunders, another one at the bell. Lee is showing great heart. War of attrition here. ProMMAnow.com scores round 10-9 for Saunders.

Round 3 – After a lot of discussion the doctor lets Lee continue but he did say “Not for long”. Body kick from Saunders and a straight left. Clinch. Left hands from Saunders. Knee to the body and elbows from Saunders. Collar tie and knee to the gut from Saunders and Lee’s is cut over his other eye now bleeding badly. They are going to stop this. That’s it. Lee looks like he’s been in a car wreck. Nice solid win for “Killa B”.

Round 1 – Should be a good one here. They trade punches to start. Hawn lands a left. Hawn shoots, puts Good against the cage. Clinched. Knee from Good. Knee to the face from Good from the clinch. Hawn backs up throws some shots and clinches again, tries to trip Good. Backs out and they square up. Left jab from Good scores. Uppercut lands for Good as Hawn comes inside, lands some body shots too as Hawn comes in for the clinch. Short right hands from Hawn, tries to trip Good. Knee to the body from Hawn. Clinched. Hawn backs out, blocks a head kick. Leg kick Hawn. Misses a head kick. Powerful. Good stalking and strikes at the bell but Hawn blocks the punches. ProMMAnow.com scores the round 10-9 for Good. Very close round.

Round 2 – Leg kick from Good, again. Good fires off punches but Hawn gets the trip takedown. Good has closed guard. Hawn landing some small punches. Good punches off his back. Feet on hips for Good, now closed guard. Left hand from Hawn, another one. Body shot from Hawn. Not much damage but staying just active enough. Hawn postures up on his feet, fires a big right that misses. Big right to the body, glances another right off the chin. Good trying to just hold on, grabs under Hawn’s leg but lets it go. Nice body shots making a thud. Good kicks him off at the bell. ProMMAnow.com scores the round 10-9 for Hawn.

Round 1 – Leg kick from Alvarez and a right hand scores. Another right and slips a counter combo. One, two from Eddie and a right lands. Alvarez using good footwork, circling Curran, using a lot of feints and head movement. Body shot from Alvarez. Right hand from Curran grazes Alvarez. Alvarez grabs a single, sweeps the back leg but Curran bounces right up. Alvarez clinches him against the cage. Alvarez tries to take him down but Curran stays up, lands a leg kick.  Alvarez fires off a combo, lands a body shot. Both guys throw flying knees that miss. Alvarez staying busy, catches a kick, shoots, stuffed, clinches.Nice one two to the body from Alvarez. Two lefts from Curran and a nice right scores. ProMMAnow.com scores the round 10-9 for Alvarez.

Round 3 – Body shot from Alvarez. He throws a couple of nice combos. Leg kick from Curran. Alvarez starting more aggressively. Big body shots from Alvarez. Right hand. Curran with a left. Another. Alvarez with double jab and Curran lands a leg kick. Alvarez lands several big shots, uppercut. Alvarez’s punch rate is high here. Leg kick from Curran and a right hook. Body shot from Alvarez. Curran stuffs a shot. Clinched. Big left on the break from Alvarez, one two to the body. Alvarez goes one to the head, two to the body, another to the head. Does it again then gets the takedown. Curran gets up while Alvarez still holding on. Thirty seconds to go. Alvarez backs up with two more body shots. Body body head again, left to the body. Alvarez looked really good with his hands in that round. Curran’s ribs have to be hurting, or they will be tomorrow. ProMMAnow.com scores the round 10-9 for Alvarez.

Round 5 – One two three for Alvarez. Moving side to side avoids a kick, lands two jabs, grabs a single and gets the takedown but Curran gets up. Alvarez goes back to boxing with combos, big body shot. Moving side to side, jabs jabs, claps his hands. Leg kick and one two to the body. Curran still counter fighting for the most part. Boos from the crowd. Nice right on the chin from Alvarez and lands two more. Boos from the crowd, most likely at Curran not bringing the fight. Body kick from Curran. Fyling knee and a left hook from Alvarez. Leg kick. Right hand. Right hand from Curran. Big uppercut from Alvarez then a big left. Left to the chin for Curran, again. Alvarez jumps up, shoots. Curran ends up with the takedown. Alvarez clearly just trying to make something happen and got careless a bit. Alvarez gets up and they slug it out until the bell. ProMMAnow.com scores the round 10-9 and the fight 50-45 for Alvarez for a complete shut out.